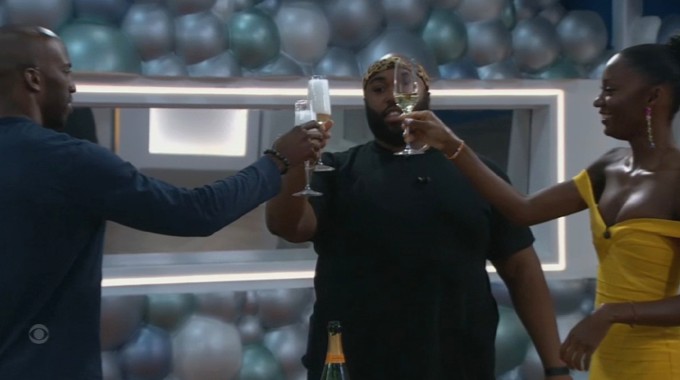 We are just hours away from the winner of Big Brother 23 being revealed by the Jury votes and Julie Chen announcing which of the BB23 HGs will take home the $50,000 Favorite Player prize. Who will snag the crown, the cash, and who will go home disappointed? Let’s take a look at our final predictions for Big Brother.

Just a few days ago I would have said we have only two clear scenarios for the BB23 F2 after Xavier won Round 1 and Azah took Round 2. At that point, both should want to go for the easy win gainst Derek F, right? Right?? Well at least one of them wants that, the other not so much. Maybe.

The leading scenario I’m expecting at tonight’s Big Brother finale is for Xavier to win Round 3, cut Azah, and take Derek on to F2 for the sweeping victory. There’s no need to break out the individual Jury votes. Xavier has this match-up won, hands down.

Perhaps we will see the bitter-Juror vote from Kyland but it won’t matter. Actually, given Kyland’s weepy-eyes DR eviction of Hannah while proclaiming all of DF’s mysteriously unobserved accomplishments I think we could see that attitude again from Kyland as a cover for his for an anyone-but-Xavier vote.

The second scenario we should see would be Azah versus Derek F. She’s got a decent chance to win Round 3 against Xavier. She beat him the other week in a duel and this next comp should be mental so his physical strength wouldn’t be an edge in that situation. Then if Azah wins R3 she should cut Xavier. No brainer. Simple and done.

If Azah gets to F2 against Derek she’ll have the argument of multiple comp wins, including a crucial Final HOH where, in this pairing, she cut the biggest threat to her victory with Xavier. Why would anyone in the Jury vote against her at that point? DF’s biggest supporter this season, aside from Frenchie, is already sitting next to him so no vote is coming from her for him. Maybe Kyland for claiming he’s got a bond with DF and maybe, maybe Xavier in the same vein, but even Xavier should want to credit Azah for evicting him in that situation.

Azah and Derek F have been feuding over DF’s stupid comments when he should have just kept his mouth shut and been dragged to the end. But he didn’t and now maybe he won’t. Azah is seriously considering taking Xavier to spite Derek. Yes, Azah has expressed feelings that Xavier deserves better than third place even at the cost of her own victory. It hurts my brain.

So say Azah does win R3 and then cuts Derek in favor of bringing Xavier to the end in the style of BB16. Well, then it’s another Xavier victory. The Jury will be stunned by this move and I think they’ll struggle to reward Azah for it especially against such a worthy HG like Xavier.

If Azah cuts DF then he votes for X over Azah. Kyland might still vote for Azah over X because again, Azah isn’t Xavier. But I just don’t see anyone having a strong, justifiable case for Azah over Xavier. The Juror respects the heck out of Xavier and he’ll likely make a solid argument to win over any final uncertainty in their ranks.

Overall I see tonight going to Xavier and he’s earned it. He’s had a strong competitive game, a reliable social game, and he’s navigated the season with minimal confrontation aside from Kyland. Xavier wasn’t the best in every department but he is the best all-around and that’ll net him the win for Big Brother 23.

Should Azah win R3 and take DF then she’s definitely earned her victory close in style to BB17. Two very different gameplays between Steve and Azah, so the comparison here is more about the not-as-strong HG pulling off the clutch win over the presumptive winner and making the right cut to secure the crown.

And then what about America’s Favorite Houseguest? Much like last season, I think this is a tough call.

Last year I had hoped for Da’Vonne to pull off the win but expected Tyler to repeat his AFP victory from BB20, but in the end, Da’Vonne happily surprised me. This year I’m hoping for a repeat of that.

Derek X is crushing our poll for AFP and he’s super popular when I would read comments on our site, on Twitter, and in our Facebook group. So I am expecting him to win AFP, but I really do hope it’s a Tiffany victory.

Tiffany was the keystone of the Cookout, and love their alliance or not, it was wildly successful thanks to her strategy and execution. Then when it got down to the F6 she was the first to go and in recent years the HG payout has been on a graduated scale for the F5. That means Tiffany’s efforts rewarded all of the Cookout but herself. Ouch. She deserves better and I hope she gets AFP but I’m trying to be more realistic and do expect DX to take the $50K prize money here.

So there we go. The Big Brother 23 finale is tonight on CBS at 9/8c after Survivor 41’s second episode. Join us back here tonight for our live coverage and get more Big Brother with us on Facebook, Twitter, and with our Big Brother App. Don’t forget CBBUS3 starts this January!