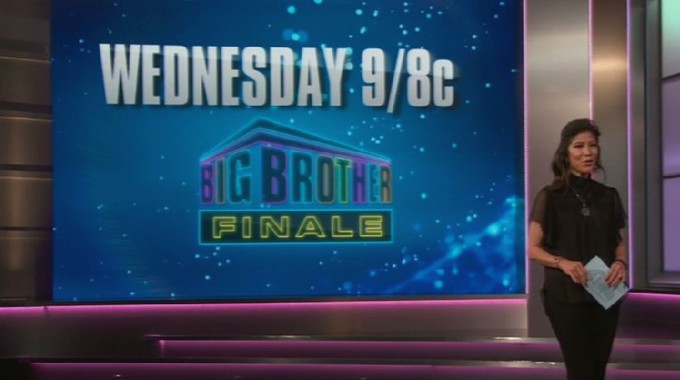 Tonight on Big Brother 23 the winner will be revealed amid the finale night event as all sixteen Houseguests are expected to gather and celebrate the season end complete with confetti and all. The show kicks off at 9/8c for the two-hour event following tonight’s Survivor 41 episode on CBS.

We’ve got a Final 3 trio featuring Azah, Derek F, and Xavier and all three are hoping for the just two spots that will stand before the Jury and make their case. Sure, we’ve heard Derek’s delusional arguments already, but what will the Jury decide when faced with the decision and what will each of the first two round winners elect to do if given the chance to pick a partner for the F2?

Until just a few days ago it all seemed like a clear path forward with Xavier electing to drag Derek the goat to F2 and Azah making the same choice for her game. As DF put it yesterday, “sit next to the fat man” at F2 and win yourself $750,000!, but in an unexpected twist DF may have similarly talked himself out of a sure thing with Azah. Azah isn’t feeling Derek’s hurtful comments about how he feels she did nothing but stare at the wall this season and so now she’s thinking she’d rather lose to Xavier, which I think she would, than see Xavier get third while DF gets second if she took her fellow Joker to the end.

It’s all kinda nuts to consider throwing away $675,000 to take $75K for yourself instead of $750K, but Azah is wavering over that very decision. We’ll find out tonight if she even has that choice when Round 2 plays out from Saturday’s competition before we get a live Round 3.

Can’t wait for the spoilers? Revisit the Final HOH Round 1 results, find out who won Round 2, and get ready for Round 3 tonight on Big Brother 23’s season finale! We’ll see you back here at 9/8c and will be recapping the whole event live here on the site. Want more Big Brother? Get our Big Brother App and join us on Facebook & Twitter! And don’t forget, Celebrity Big Brother 3 arrives this winter for more Big Brother in the off-season!