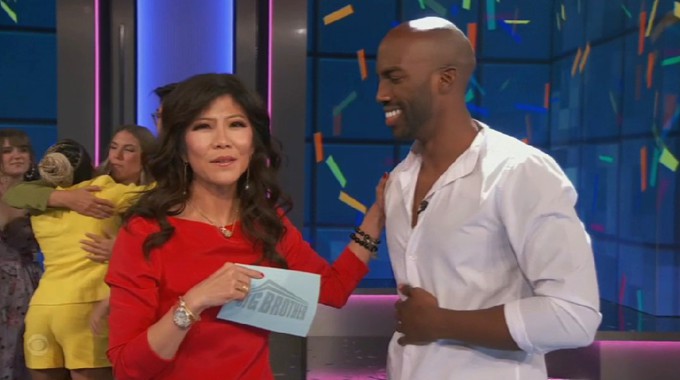 Let’s go! It’s time for the Big Brother 23 winner to be revealed in the season finale as the Final 3 Houseguests faced off in the last two competitions to crown the winner of BB23 and unveil America’s votes for the Favorite HG prize money.

There are just three members of the Cookout alliance left in the house with Azah, Derek F, and Xavier. One of them will earn the Jury’s respect, or at least enough votes, to walk away with the largest grand prize the Big Brother series has ever offered at $750,000. But don’t cry for the rest of the cast just yet because second place will take home $75,000 and AFP nets a cool $50,000 which ain’t too bad for a consolation prize!

We’ve already got the Round 2 spoilers, but now it’s time to see it play out from Saturday’s competition. Azah and Derek F are facing off here in a timed competition to see who can knock this one out the quickest to earn a seat in Round 3 against Xavier.

HGs have to remember which 4 HGs are the answer to each question and then race to spin the wheels of a massive slot machine to line up the right HG faces. Lots of racing and moving on this one.

Great session with the Jurors debating the final three houseguests. Jurors are excited to see Kyland there. Lots of debate over whether Derek or Azah deserve to be at F2. Talk turns to Kyland’s claim that DF deserved to stay in the house over Hannah when he says Hannah contributed as much as Derek did for the game. Hah! Come on, Kyland.

The first two rounds’ winners will now face off in the live Q&A competition to crown the final Head of Household of BB23. That winner will then cast the final eviction decision of the season to form our Final 2 pair and move forward to face the Jury.

One vote is all we have here to decide the last Juror of the season. Which HG falls just short of a chance at the big cash prizes?

Nine votes between the F2 and the big winner. Time to find out how the Jury voted and who gets the $750K prize! Julie Chen will be revealing the keys and votes as we count down to the magical number of 5 votes needed to crown the winner of BB23.

You’ve been voting all week for the AFP crown. Now it’s time to find out which favorite HG gets the $50,000 bonus cash prize this year.

The top two contenders for AFP were Tiffany and Derek. Julie says the vote was very, very close, but Tiffany pulled out the win. Congratulations!

What do you think of these results? Did the right HG win the season? What about the final eviction and the Fav HG results? Are you happy with how the season turned out? And don’t forget, there’s more Big Brother coming up sooner than next summer… Celebrity Big Brother is back!

Don’t wander off for too long! Big Brother is back this January and February with a new winter edition of Celebrity Big Brother! The house lights are coming back on soon and we’ll be here again with our in-depth coverage with spoilers, results, and daily Feed highlights of everything CBBUS3 has to offer!