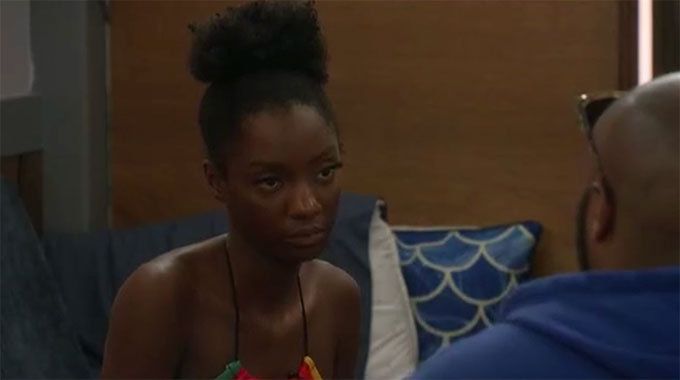 I can’t recall a more lively finale eve (or finale week for that matter) than the one we’ve had inside the Big Brother 23 this week. It’s been Azah vs. Derek for days now, and last night was no different. Both pretended they patched things up, but every time they discussed it, it was clear neither of them was past whatever was bothering them. Derek continued to guilt-trip Azah throughout the evening and even had her second-guessing her decision once again. Did Derek’s guilt trip work on Azah or will she go with Xavier if she wins the final HOH? We’ll know later tonight, but read on to find out what she was thinking before she headed to bed.

4:00 PM BBT – Azah mentions that she felt she was on the outs of the Cookout from the beginning. Xavier explains to her that was because of how close she was to Britini and how personally Azah took it any time Britni was nominated.

5:52 PM BBT – Azah tells Xavier that when she first knew this was going to be the Final 3, she knew she had a shot to win or was getting third, and she was fine with which ever of those outcomes would be. She says but things happened this past week that made her reconsider.

5:55 PM BBT – Azah says to Xavier that she and Derek squashed things this morning but she still feels bad how he’s feeling. She says she has something to propose to Derek. She says what if they asked him who he would like to sit next to in the Final 2, and whoever he picks, if they win they take Derek. But if the other person wins they take the other person. (This is confusing and a really bad idea, but what she’s saying is if Derek says he wants to sit next to X, and X wins, X takes him to Final 3. If Azah wins, she can take X).

5:56 PM BBT – Xavier says he doesn’t think Derek’s answer would change and he would pick Xavier, which makes the whole situation exactly the same. Azah says she just doesn’t want Derek to be so disappointed in her. Xavier tells her that Derek is just playing the game (now more than he ever has). He says Derek is going to say whatever he can to make sure he gets second to place to either of them.

5:58 PM BBT – Xavier says he thinks Derek feels like he can beat Xavier, but would lose to Azah, and that’s what all this boils down to.

6:10 PM BBT – Xavier says he’s most bothered by Derek’s entitlement in all of this. X said they said at Final 4, the only person who deserved to be in the Final three is the person who won competitions and Derek hasn’t won any to earn his spot in the Final 2. Xavier says he’s really annoyed by Derek and the whole “Azah won’t take me” thing. He says Derek seemed fine with the idea of Kyland taking X, but now that it’s Azah taking X he has an issue with it.

6:15 PM BBT – Xavier tells Azah that Derek giving her the guilt trip is really unfair to her. He says she won a competition and earned the position she’s in and he lost.

6:27 PM BBT – Xavier says that if he wins and Derek gets third, he can guarantee that some of the money will go to Derek’s mom, but he’s not allowed to tell Derek that because It’s against the rules. He says they are not going to leave Derek out to dry.

7:40 PM BBT – Derek tells Xavier he needs to talk to him and Azah tonight. He says he feels he needs to make a pitch to both of them. Xavier says D made his pitch to Azah and doesn’t have to make one to him, so he’s good. Derek says he still wants to make sure.

8:05 PM BBT – Derek still guilting Azah. She tells him that she feels like she was just a safety net this entire game.

8:20 PM BBT – Azah tells Derek she still has some thinking to do.

9:10 PM BBT – Xavier tells Azah to do what she thinks is best if she wins. She says if she makes the decision about her and takes Derek, she feels like she can win. But then says she doesn’t know why Xavier’s story and game resonates so much with her. She says she feels he should get third place.

9:20 PM BBT – Xavier reminds Azah that this is a game and Derek is playing it. He’s trying to guilt her into taking him.

9:24 PM BBT – Xaiver says to Azah if she thinks cutting Derek is going to hurt too much, take Derek. If not, then take Xavier.

9:30 PM BBT – Azah running through her options to herself now. Sounds like she’s still leaning toward taking Xavier. She can’t get past Derek telling her all she did was stare at the wall all summer.

10:15 PM BBT – HGs playing cards together at the kitchen table.

11:15 PM BBT – Derek camtalking that he expects Azah will betray him and there’s nothing he can do about it. He thinks she’s being weak about Xavier and being thirsty instead of sticking to her plan to take him (D) to F2.

11:20 PM BBT – Derek says he’ll regret not taking her out earlier. Now he’ll have to rely on Xavier sticking to his word and taking him to F2.

11:30 PM BBT – Azah tells Xavier that she believes DF’s star will be launched by his time on Big Brother. Xavier suggests that DF should be in the running for AFP.

11:40 PM BBT – Xavier tells Azah that he feels the pressure is on him to deliver for DF or he’ll let their families down.

11:45 PM BBT – Azah worries DF’s family will hate her. Xavier assures Azah that no one’s family has her. He reminds her they’re here to play a game and that’s all. She says DF told her that his (D’s) mother was depending on her and that makes her feel bad. Xavier tells her not to feel bad and it’s just about making good TV.

11:55 PM BBT – Lights out in all rooms. Xavier and Azah are sleeping in the boat room while Derek continues to stay alone in the coral room.

Sounds like Azah is back to wanting to take Xavier over Derek, but we’ll have to wait and see if she even has that choice. She’s certainly a competitor and has been Xavier before in a face-off so it’s possible, but this could all be for nothing if X wins R3 and takes Derek. It’s still been far more exciting of a final few days on the Feeds than I imagined we could possibly get.

That was it! Our final Feed Highlights Report of Big Brother 23! We hope you enjoyed it and will stick with us today for our finale coverage and then join us back here for Celebrity Big Brother 3 in a few months. Thank you for being readers!