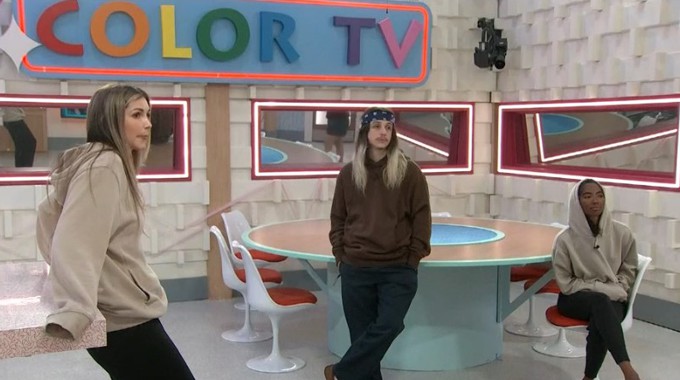 It’s time to catch up on the all the latest Big Brother spoilers for you since Thursday’s tumultuous Double Eviction that eliminated Terrance and Michael. Since then the remaining Final 5 HGs have played through the HOH comp, set nominations, and even had the week’s plans thrown in the trash by the Veto comp. Read on for all the latest and what’s coming up next on Big Brother 24.

Head of Household:
Down to four competitors and Turner watching on the sideline, it looked like the ladies would be perfectly lined up to win this one with the odds in their favor. Nope! It was a timed, individual performance competition played out in the dark with the theme of a horror slasher film. That proved too much for one HG who had to bail on the comp after not making it past an initial crawlspace area of the comp. So if none of the ladies won then that means the new Head of Household is…

Nominations:
Monte is calling the shots and he’s going to protect his two closest remaining allies, Turner and Taylor. He’s even got a backup here with Taylor. It’s Monte, he’s not going after the one other guy in the house even though that one guy has a stronger resume than him and could snatch away the $750K. Because Monte. Anyway, the target is Brittany as Alyssa remains a bump on a log.

Power of Veto Competition:
What’s Big Brother without some wrenches thrown in your plans, right? Monte wants out Brittany, so if she wins the Veto then she’s safe but Taylor becomes the renom. The real play here is for Taylor to win, save one of the noms, and get Turner on the Block to be voted out. Ah well, it was a good idea. Instead the HGs got a 5AM wakeup call and two minutes to report to the backyard. One of them didn’t make the cut.

Power of Veto Meeting:
Obviously the Veto is going to be used and Taylor is heading to the Block. She had hoped she could turn things against Turner, but again, Monte. Monte is not going to renom Turner! Monte is afraid of the women working together and if he went into F4 watching from the sidelines then he’d only have the Veto to protect himself. I get it, but I’d still want Turner to not make it to F2 against me. The meeting is coming up Monday and this one will be straight forward.