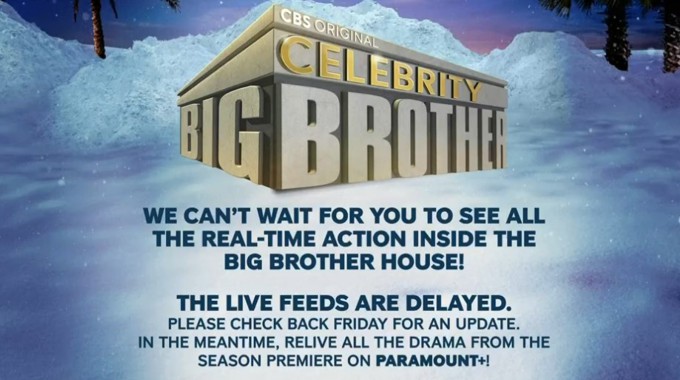 Update: After nearly a day of mysterious and unexplained delay, CBS and Paramount announced this evening that the Feeds would arrive Thursday (2/3) at 10PM ET (7PM PT). So out goes the “Friday update” and here comes Thursday night Feeds, a day late but hurry on up.

Celebrity Big Brother 3 arrived on Wednesday night with its season premiere introducing our eleven new Houseguests for the three-week run of Big Brother fun. But as the episode ended and fans turned to the promised Live Feeds there was a sudden, unexpected change. No Feeds!

After days of watching a timer counting down to 9PM ET on Wednesday night the messaging suddenly changed to the graphic above with the following text:

We can’t wait for you to see all the real-time action inside the Big Brother house!

The Live Feeds are delayed.

Please check back Friday for an update. In the meantime, relive all the drama from the season premiere on Paramount+.

The Paramount Plus Twitter account posted the same message precisely at 9PM ET. So obviously this was an anticipated delay that CBS and Paramount+ were prepared to announce after the premiere concluded but made no mention of during the episode. That certainly didn’t stop them from filling commercial breaks with reminders to go sign-up for the Live Feeds either. The Feeds they knew wouldn’t be offered as promised. Embarrassing.

An important note here is that the message promises only “an update” on Friday. We don’t know if that means Feeds will arrive on Friday or we just get a revised “oops, sorry, still no Feeds today” message from them. Very poorly handled.

So what happened? We do not know. CBS/Paramount/Fly On The Wall/etc. have not made any further announcements or added any explanations as to the Feeds’ delay. That of course just opens the door to speculation. Did HGs get sick? Did someone quit? Did Mooch finally decide to return? Who knows. Quite possibly, as it seems to be a repeating issue on the Celebrity edition, someone may have tried or did quit and has left the house.

The first eviction of the season is on Friday and if CBS is holding off Feeds until then they may either be trying to hide the first eviction or cover a drop-out. But as mentioned above, the Feeds message just says to expect an update on Friday. What a mess.

More Celebrity Big Brother arrives on Thursday (9/8c) and Friday (8/7c) so there will be more to see as we wait for the Feeds to arrive. Maybe we’ll get more details today, but I wouldn’t hold my breath.