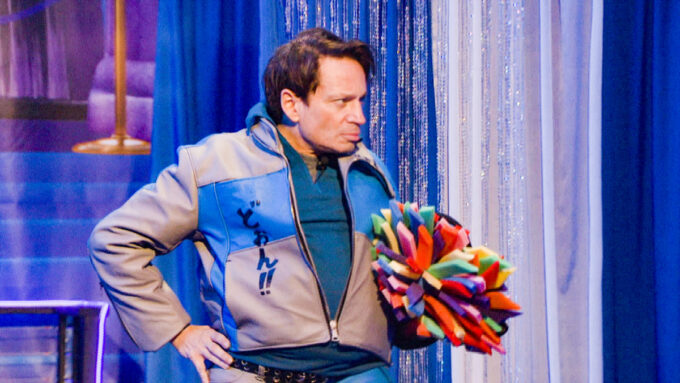 Chris Kattan has left the building on Celebrity Big Brother 3 and while the initial shock of his abrupt departure is wearing off the effects on the game could last a few more days.

With just eight Houseguests now left in the game, we’ve suddenly skipped over a round of six total eviction votes down to just five at what could be a crucial turning point in who holds the power going forward. Now with Kattan gone just three votes will carry the majority this round.

Remember we just heard Kirkpatrick explain on Wednesday’s episode that his allies decided against the Todrick blindside during Monday’s live eviction because they couldn’t rely on Kattan to follow the plan and help them with the numbers and his pivot vote. Now not only will the HGs not have to worry about influencing Kattan’s vote, but they also don’t have to worry about the potential tiebreaker that would go with it.

Miesha and Todrick wanted Carson out this round, but now that Shanna has the Veto in her hands it looks like Carson could be saved and if he does come down then there’s a chance it could be either Todd or Kirkpatrick going up in his place.

The more likely option seemed to be Todd, but then Miesha was putting up a strong front overnight on the Feeds that if she thought Chris would vote out Todd instead of Cynthia then she would renom Chris instead. Todrick liked that plan because he’s ready to send Kirkpatrick on out the door. I’m not so sure Miesha wants to see that happen though as she considers Chris an ally and needs the numbers. I expect Miesha will be tempted to name Todd as the replacement. That’ll be a mistake.

If we’re looking at just three votes to decide this week’s eviction we’ll have Shanna, Carson – if he’s saved, and then if Chris isn’t the renom that’ll be the trio needed to keep Cynthia and send Todd out the door instead. Previously, before Kattan had walked out the backdoor, it could have been Kattan as the renom against Cynthia leading to three votes against Kattan and Miesha splitting the tie against her preferred option of Cynthia. Or maybe Todd, Todrick, and Lamar would have voted against Kattan in a sweep and he’d be out anyway.

Miesha has lost her chance at a tiebreaker this week because of the loss of Kattan in the roster. She’ll be at the mercy of HGs she thinks are still aligned with her, but aren’t as much as she’d hoped. Todrick and Miesha have paired tightly and it’s become an issue of concern for the other HGs. Controlling the eviction will help keep the other side stronger going into the next HOH comp where it could be all/most against Todrick while Miesha watches from the sideline. Now Todrick was no slouch in that last HOH comp or the previous live Veto, so after several second places he could easily pull off a win to keep power and safety on his side.

The next eviction is coming up on Friday night (8/7c) for a two-hour show where we’ll find out just what will happen with this next vote. Who do you think will be heading out this round? We’ve still got the Veto Ceremony ahead and that will of course settle a lot of possibilities, but until then we’ll keep watching and waiting for more action on Celebrity Big Brother!