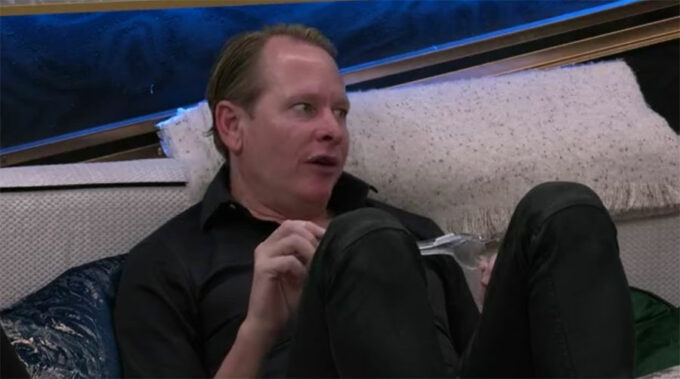 We are just past one week of Celebrity Big Brother…  wait, hold on. Let me check my math. Yes, just one week and a day. That seems unreal considering there have been two evictions and someone walk from the game. Anyway, as I was saying, we are only down one week of CBB3, but things are moving so fast, it’s time to do our usual State of the Game, where we run down what’s going on and how we fill about it all.

So first and foremost, I have to start with the self-eviction. We have virtually no details how it went down, or exactly why, but we know that Chris Kattan has walked from the game. As we saw on the last live episode, he was ready to go over Mirai and was upset and confused when that didn’t happen. And then on Wednesday, after a lengthy Live Feeds outage, we learn that sometime in the day Kattan decided to quit. A little later that evening, Shanna Moakler mentioned being responsible for him leaving because she didn’t use the veto in the live episode. But Carson assured her that wasn’t her fault. I think it boiled down to him just being ready to go.

Self-eviction are nothing new. We had another as recent as Big Brother 19 when Megan quit. And we still don’t know what went down with Anthony Scaramucci in the first Celebrity Big Brother. But here we are.

As for those still in the game, I think it’s pretty obvious what’s going on. Miesha and Todrick have been running the game and it has been looking like everyone is just going to let that happen. Chris Kirkpatrick and Shanna could have taken that strike during the live episode, but didn’t. And then Miesha turned around and won the next Head of Household, her second of the season. BUT. The tides are starting to turn. It seems even their closest allies are starting to see that they aren’t going to stand a chance to get to the final two seats if they let things continue as they have. Miesha and Todrick have made it very clear they’re a pair, and haven’t even been that nice to the others. So I think almost everyone (I say that because Todd is still foolishly with them) is ready to strike. But is it too late? If Todrick happens to win the next HOH, then it is definitely likely too late. They have a strong chance at just winning out the rest of the season. In normal Big Brother seasons, that is hard to do, but with the competition performance of this cast, and with Miesha’s prowess, it’s very possible.

So if Todrick and Miesha does manage to win out the rest of the season, this could go down as one of the most boring seasons ever. And it would be hard to respect their wins, considering the lack of competitors in that house this season.

I think if Shanna uses the veto on Carson this week, and there’s a way to also save Cynthia, then it’s possible things could get turned around and get really interesting. If anyone other than Todd or Todrick win the next HOH, then it should be more than possible to get one half of that power duo out of the house.

But if Shanna doesn’t save Carson, and he goes this week, I think the state of the game will definitely continue to decline. Of course this is all relative, as there are surely Miesha and Todrick mega-fans out there, but looking at the big picture, I think it just won’t be good TV if Miesha gets her way this week, and a fan-favorite like Carson leaves.

Now onto some positive aspects of Celebrity Big Brother!

I have loved watching Shanna play this old-school floater game. Shanna has jumped where the power is, and even though it might have caught up with her, it has been fun to watch. Here’s to hoping she floated her way to the right side of the house and they can make a move this week.

And then there’s Carson, the Diary Room Queen of the season. Every season needs a good Diary Room Queen (like Britney Haynes), and this season it is Carson. And trust me, he would greatly appreciate the Queen title. He is so natural and never needs lines fed. Some may say some of his humor is a bit corny, but I think it’s brilliant and I would hate to see him go this week.

As for Miesha, she is playing a great competitive game. I give credit where it’s due. I think if she had the other skills it takes to play Big Brother, she’d be an incredible player. But winning competitions and strong-arming other players alone just isn’t enough. And shutting herself off with Todrick was not the smartest move. They’re now seen as one unit and that’s never a good thing in this game.

Everyone else is just kind of fodder at the moment. I appreciate some of Kirkpatrick’s game, but he is definitely going out soon. His playing the middle has been far more obvious to the others than Shanna’s has and I don’t think he has a path to the end of the game. Lamar is funny and interesting to watch, but he’s just kind of there right now. Cynthia says she has a lot of fight in her, but we haven’t seen it yet. And then there’s Todd. I can almost never find him on the Live Feeds, and he’s definitely not playing Big Brother.

What do you think of everything that has gone down on Celebrity Big Brother so far?