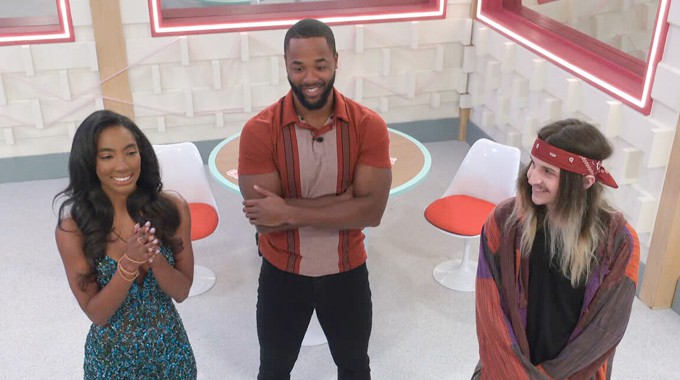 Monte, Taylor, and Turner have survived nearly three months of evictions and backstabbings to show up on finale night. It’s quite an achievement, but there can be only one winner. So far the trio has faced two of the final three comps with Turner winning Round 1 after holding the firmest grip on his spinning weiner (seriously, who comes up with this stuff?) and then Monte bested Taylor in the second round, a combination of physical & mental, that we’ll see tonight.

So who makes the Final 2 and who wins Round 3? I think it’ll be very close for the Final HOH in R3 and could go either way. Round 3 has often seemed relatively easy and could just require one HG to get too nervous and make an easy mistake. Neither Monte nor Turner are a big standout to me on this final comp.

If Turner wins Round 3 over Monte I believe he takes Monte. He’s been pushing hard the past few days and reminding Monte that they’ve been holding this commitment to each other since nearly the very beginning. From Oasis to the Pound to Leftovers, they’ve survived and Turner seems to be holding tightly to that. He did, however, mention to Taylor that he’d consider what she was telling him about Monte beating him in the F2. I agree on that, but more on that later.

So if Turner wins Round 3 I think he’ll evict Taylor and march to the Jury standing next to Monte.

Going the other way, if Monte beats Turner in Round 3 then it really does sound like he’s going to evict Turner and take Taylor. When Turner has been harping on keeping Monte we’ve heard some not-so-firm responses from Monte about doing the same. He is doing his best dance around the topic when Turner brings it up. Meanwhile, he’s had open talks with Taylor that he’s definitely taking her to the end. Seems pretty clear what he’s doing.

If Monte wins R3, then I think he evicts Turner and brings Taylor to the end.

With those scenarios in mind, I don’t think we see a Taylor Vs Turner Final 2, but let’s take a look at the other two matchups. Branden already broke down the stats and strategies for the Final 3 with everyone being fairly close in their wins. See, when Michael wins almost everything it leaves very few crumbs for the others to scoop up. Hah!

If Turner wins R3 and takes Monte then I think we have a landslide in Monte’s favor. From what Hamsterwatch reported, the Jury is much more pro Monte and Taylor than they are Turner. Turner made his way through the season cutting who he needed and never seemed to branch out from his core. I think that lack of social game is what hurts him the most, especially when his game stats trail Monte. Monte has more wins and better relationships with the Jurors.

If Turner takes Monte (or even if Monte takes Turner) then Monte wins the game.

Should Monte stick to his promises here and wins R3 then it looks like he’s taking Taylor with him to Final 2. If they get there together I’m expecting Monte to win. As @BBGossip detailed out the winner of R3 has overwhelmingly won the game, but of course not always (Derrick vs Cody, Maggie vs Ivette). But if Monte puts another feather in his cap of stats with a R3 win and impresses the Jury then stacking his successes with a solid enough Jury relationship and I think he’s got this.

Taylor could still pull it off, but I think it’ll be tough. Had she won her way to F2 then I’d obviously say her chances were much better, and Taylor has admitted that openly in her camtalks. Taylor does have a really good speech prepared and she’s going to go out swinging if she gets there, I’m just not convinced she can outweigh Monte in the end, but I’d be very excited for her if she did. It would make a heck of a Cinderalla story for her though if she beats Monte and she’d have very well earned it for sure should she pull out the win tonight.

We’ve been polling our readers since Thursday and when the official voting ended today at 9AM PT we closed our poll too. In the final tally for our unofficial poll we see Michael in first with Taylor right behind him. Next is Turner, then Kyle, then Joseph rounding out the Top 5 earners from our readers. After that, it drops way off in the percentages.

It’s so close between Michael and Taylor. They both played incredibly entertaining games this season and both would make great, well-deserved AFP winners. I’d be thrilled to see either of them win and couldn’t argue it against their victory. I won’t be surprised at all if Taylor tops Michael here and am kinda expecting it, especially staying in the game longer which always helps to maintain front of mind for viewers. Add on to that a fear from fans that she may not be rewarded otherwise for her season of gameplay, potentially falling just short of F2, and it could be enough to put her over the top. We will see tonight.

So share your thoughts with us. Who will win Big Brother 24 tonight and which HG takes home AFP bonus prize?