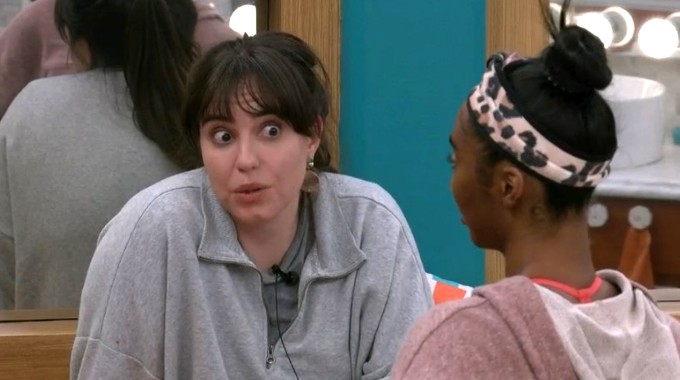 The Leftovers emerged this past week on Big Brother 24 as a rather well-focused and strategic group of Houseguests with a mission to flip the season’s trajectory and pull together several outcast HGs to make a stronger, more reliable alliance. After a remarkably successful eviction on Thursday night the group is riding that high and a few of them are setting a long term goal for their end game.

Easily the most outcast Houseguests of the season so far have been Taylor by a mile with Michael not far behind and we’ve definitely seen Brittany struggle to find footing with various groups over the past three weeks as well. Seeing the three of them included and supported in the Leftovers is definitely a positive turn of events for an environment that can so easily turn into an arena of bad behavior. So it isn’t surprising to see them start to band together a little more strongly overnight.

Flashback on your Live Feeds to 4:34 AM BBT 7/29 on Cams 1/2 to find Brittany, Michael, and Taylor together in the bathroom. They’ve been debating the best next targets and moves with eliminating bigger targets like Nicole and Daniel or trying to split up the smaller targets and forcing them over into their pairs.

Looking ahead, Brittany says they need to stick with The Leftovers and continue the mission and eliminate their targets. So no talk here of trying to turn on the Leftovers and taking out their allies from inside. I’d guess they know how good they’ve got it at the moment and best not to take this new alliance for granted.

Taylor says, “I want to rock out with you guys.” Michael agrees, “this is my ideal final three.” Brittany adds in a “me too” and the trio has made it an unofficial, pinky-swear-free F3. Now could this set get to the end? That’d be a tough mission with strong allies in the Leftovers they’d have to take out, but if they let Nicole and Daniel stay might they take them out for them? Ehh, that’d be a risky move for sure.

Could this trio make it to the end together for the Final 3 Houseguests of Big Brother 24? I’d be surprised, but anything is possible and if they can keep working with The Leftovers as a whole to stick this out the next few weeks they might have a decent chance.

Who do you think would be the first of the three to fall on the road to finale night? We’ll keep watching the Feeds and see what happens next on BB24.