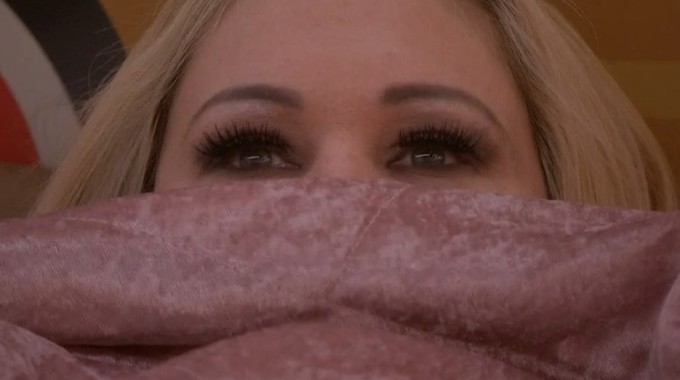 Saturday may have been the most bizarre day of Feeds yet that we’ve seen for Celebrity Big Brother 3 and whether you liked how it twisted and turned, you’ve gotta admit it was a stunning turn of events that will leave even the most moderately logical person scratching their head. And then there’s Cynthia Bailey. Oh my do we have a bridge to sell her when she gets out of the Big Brother house!

We’ve already detailed out the full day’s timeline in our Feed Highlights Report for Saturday so we won’t rehash step by step, but I want to make sure everyone is caught up on the state of the house this weekend because the round ends on Monday and who knows how this is going to turn out.

Early on Saturday Todrick was presented an offer to join Carson, Cynthia, and Shanna if he would forsake Miesha. After some consideration, Todrick countered with his own proposal. How about he keep Miesha and have Carson & Cynthia eat one of their own allies instead. Sounds great, said Cynthia.

Todrick went to Cynthia and started reeling off one claim after another that Shanna has been secretly working with him and Miesha to target her and Carson. Pause there for a moment. ONE day before this conversation, Shanna had just voted to keep Cynthia over Kirkpatrick, her closest ally, and the day before that, Shanna used her Veto to save Carson, Cynthia’s closest ally at the risk of losing her own. Okay, now that we’ve established the scene, let’s continue.

Todrick pulls in Miesha who piles on the servings of trickery and Cynthia gobbles it all up. Miesha tells Cynthia, oh yeah, Shanna’s been with us as a F4 and has told us that Carson is her big target. Reminder: Shanna just saved Carson.

Soon they get Carson involved and he seems skeptical then he becomes less so. Or maybe not. After hearing about this for a while Carson goes to talk with Shanna, who has no idea these conversations are happening (another reason not to hide in your back corner bed). Shanna is stunned and denies all of it. She gets Carson and Cynthia upstairs, but the lies are already rooted in Cynthia’s head and they start arguing loudly. That then boils over to downstairs with everyone gathered as Cynthia wants to openly debate it.

It doesn’t last long and Shanna retreats to her bed. The Nominations Ceremony eventually rolls through and Carson has decided to keep his Noms plan the same with Miesha and Todd going to the Block. Miesha had pushed for Todrick, not Todd, to be on the Block to guarantee he’d be able to play for the Veto and help their cause. Todrick only supports this cause to a point, and that point doesn’t involve getting himself on the Block.

After Noms are done, Shanna asks Cynthia for a talk. Before Cynthia goes she thinks of something. And this is just as peculiar as the rest. It’s like Cynthia needs extra fake reasons to believe an obviously fake scheme. Cynthia asks Todrick if Shanna knew that she (Cynthia) and Carson were going on the Block last round. Um, why yes! Yes, of course, she did, claims Todrick because obviously, that’s the right answer to support his scheme. Cynthia then asks Shanna the same question but doesn’t believe Shanna’s denial because that would counter her own echo chamber. So now Cynthia is creating items of concern, having Todrick reinforce them, and then she holds them against Shanna. Bless her heart. The whole thing is perplexing.

Later that night Cynthia tells Carson that she just couldn’t believe that Miesha would lie to them about this. Miesha. The person who nominated you days ago and has TWICE nominated your closest ally. That’s the person who you trust? Have mercy. Carson seems to agree with Cynthia, but I can’t tell if he’s just yielding to Cynthia or truly believes it like she seems to believe.

It’s all comically foolish of Cynthia and Carson. And it’s all very impressive of Todrick and Miesha. They found a crack in the wall and busted it wide open. I don’t understand how anyone with basic levels of logic and sanity could fall for this obvious trick but say hello to Cynthia and Carson, the biggest suckers of the season. Where this goes, I have no idea but the next eviction is on Monday night and we’ll soon find out.

Oh, and for next round? Miesha and Todrick have already agreed that if they get Shanna out this round then Carson should go next. Well done, Cynthia, you knucklehead.