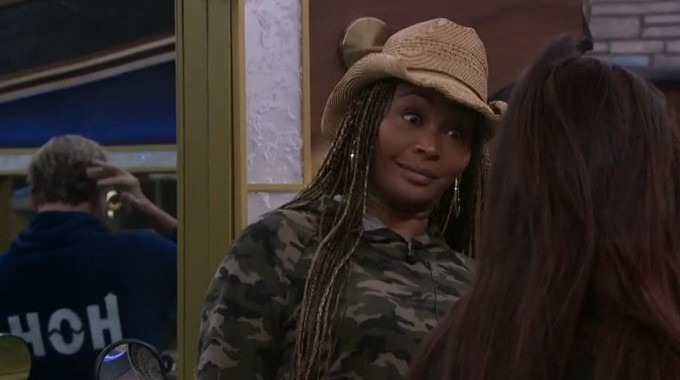 Wowza what a day in the Celebrity Big Brother house as the game has been turned upside down thanks to Todrick and Miesha convincing a very gullible Cynthia that up is down and left is right. My goodness, it was embarrassing to watch how easily they convinced Cynthia and then Carson of their illusions of Shanna’s gameplay, but it was very effective and could end up saving both Todrick and Miesha this week. Read on for all the details including the Nomination spoilers for this round of CBB3.

10:15 AM BBT – Carson talks with Shanna, Cynthia, and Lamar to explain he has told Todd that he (Todd) would be a pawn up against Miesha. Carson wants them to agree to vote out Miesha. He confirms Todrick made a deal on the wall last night, so Todrick needs to also leave Noms as they are if he wins Veto.

10:20 AM BBT – Carson reiterates to the group that Miesha must go this round.

10:35 AM BBT – Todrick is brought in to discuss with Carson, Cynthia, and Shanna. They explain they’ll make him part of their F4 if he’ll let Miesha go this round. Todrick admits he’d lose against Miesha in F2. He says he’ll have to talk with her about it.

10:50 AM BBT – Todrick explains to Miesha what was pitched to him: don’t use the Veto if you win it and you can join us for F4.

10:55 AM BBT – Todrick questions why Carson is adding more terms to the deal they made the night before.

11:30 AM BBT – Miesha and Todrick continue to discuss ideas and options in the exercise room.

12:30 PM BBT – Todrick is working on Cynthia to turn her. Todrick claims that Shanna came to him and said Carson was the biggest threat to her and then continued to throw the HGs under the bus to him. Cynthia wants Carson to hear this.

12:40 PM BBT – Cynthia goes to Lamar and asks him if he trusts Shanna. He says no, he does not. Todrick suggests Miesha didn’t put up Shanna because they’re working together. Lamar says that doesn’t seem to be true. He says Shanna seems to be on Carson’s side. Todrick counters that if Kirkpatrick hadn’t gone up then Shanna was going to vote out Carson.

12:50 PM BBT – Todrick gets Miesha to join working on Cynthia’s gullible nature. Miesha claims Shanna was working/voting with them because Shanna complained that Carson and Cynthia hadn’t included her (Shanna) in their group. Cynthia says Shanna was in their alliance.

12:55 PM BBT – Cynthia counters that Shanna has said she tries talking to Miesha but doesn’t get any info. Todd says that Shanna has been telling them the same thing about Carson. Todrick seemingly slut-shaming Shanna by saying she walks around the house half-naked and that’s her gameplay. Miesha claims Shanna is using sex appeal to influence Lamar.

1:00 PM BBT – Carson is now involved as the group tries to convince Carson that Shanna said he (Carson) needed to go home. Carson is shocked by the suggestion. Miesha claims that Shanna also agreed to a F4 with her, Todrick, and Kirkpatrick.

1:10 PM BBT – Todrick again claims that Shanna was planning to vote Carson out this week because she said he needed to go. (Note: Shanna had just saved Carson with the Veto…)

1:15 PM BBT – Carson says he’s shocked and can’t believe what they’re claiming. He asks the obvious question, why then did she (Shanna) save him. Miesha claims it was to help her own game.

1:25 PM BBT – Cynthia is so upset and convinced that she says she won’t sleep in the bed next to Shanna.

1:35 PM BBT – Carson wonders what to do about nominations. Miesha says he should still put her (Miesha) up and then they could try to BD Shanna. Miesha suggests putting Todrick up with her. Todrick doesn’t like that. Shanna arrives and breaks up the conversation.

1:40 PM BBT – Cynthia has been completely fooled. She says she won’t talk to Shanna anymore unless Carson is there because Shanna has been coming for him.

2:05 PM BBT – Carson has gone to talk with Shanna and tells her what’s going on. She’s stunned and says she’s told them everything. He believes her. Carson continues to detail what has been claimed against Shanna. She tells him about Miesha and Todrick’s argument with her about the line being drawn when she saved Carson this week. Shanna assures Carson that she was always with him.

2:10 PM BBT – Cynthia, Carson, and Shanna are now up in the HOH room. Cynthia telling Shanna what they’ve just “learned” about Shanna. Shanna reminded her that she saved Carson. Shanna is upset and says if they believe these lies then put her up.

2:25 PM BBT – Carson with Todrick and Cynthia, says he’s going to look bad putting her up after she just saved him. Cynthia says Shanna was coming for him though and part of why he was on the Block.

2:50 PM BBT – Shanna talks again with Carson and reminds him that she saved him and voted to keep Cynthia, as she’s being accused of working against them.

2:55 PM BBT – Shanna tells Carson she never trusted Todrick and as soon as he was in trouble he panicked and threw her under the bus. Carson tells her to hang in there.

5:15 PM BBT – Feeds return from the Nominations Ceremony. Shanna asks Cynthia if they can talk later.

5:30 PM BBT – Before Cynthia goes back to talk with Shanna she asks Todrick if Shanna knew that her (Cynthia) and Carson were going up. Todrick stumbles then realizes the opportunity to trick Cynthia again. He says, oh yes, she knew and he had told her.

5:30 PM BBT – Cynthia goes to talk with Shanna. She asks if Shanna knew they were going up. Shanna says no, but it was assumable that two of the three of them would be nominated. Shanna goes on to explain what happened last round when Chris thought they could outmaneuver Miesha and it backfired with his eviction. Shanna promises she was not making moves against them. In fact, she was saving them. Shanna says this is obviously Todrick’s work to destroy their power and he managed to do it in minutes.

5:45 PM BBT – Cynthia is suspicious that Shanna hasn’t been on the Block. She notes that she and Carson have been nominated. Shanna makes the obvious point that they were up because of the people she’s now believing over her.

5:50 PM BBT – Cynthia goes back to the kitchen to report that Shanna says Todrick is lying about everything.

7:10 PM BBT – Cynthia talks with Lamar and says Shanna is denying all the claims and says everyone is lying. Cynthia wants Shanna to admit to it now.

8:10 PM BBT – Todrick and Miesha decide Todd is their backup target if Shanna wins the Veto.

8:20 PM BBT – Cynthia tells Carson that she just doesn’t believe Todrick and Miesha are making all this up. (Sigh.) Cynthia doesn’t think Miesha would lie to them. (Sigh.) Carson says he’s starting to trust Miesha. (Sigh.) Cynthia says that Shanna saving them doesn’t offset all her lies to them.

9:30 PM BBT – Carson talks with Shanna and says he doesn’t want her to feel isolated and it’s all still just a game.

9:35 PM BBT – Miesha plots with Todrick that they can get Shanna out this week and then Carson next week. Then she thinks they’ll have a clear path to victory.

10:10 PM BBT – Todrick is nervous by the idea of being in a F4 with Carson. Miesha agrees they’d do better without Carson or Cynthia in the F4.

11:50 PM BBT – Shanna is chatting with Cynthia and Carson in the HOH room.

12:50 AM BBT – Cynthia, alone with Carson, says all she’s got is him and Shanna and anything that jeopardizes that makes her crazy. Carson says he thinks they’re going to be okay.

These were stunning Feeds to watch. For Cynthia to go so full-in and buy what Todrick was selling, it was just peculiar and as though Cynthia had been just waiting for some reason to distrust Shanna. Shanna, who just the day before had voted to keep Cynthia and the day before that had saved Carson. That’s who Cynthia thinks is against them, not the person who keeps nominating her and Carson. Ohh she’s going to feel foolish when she gets out! Yikes.