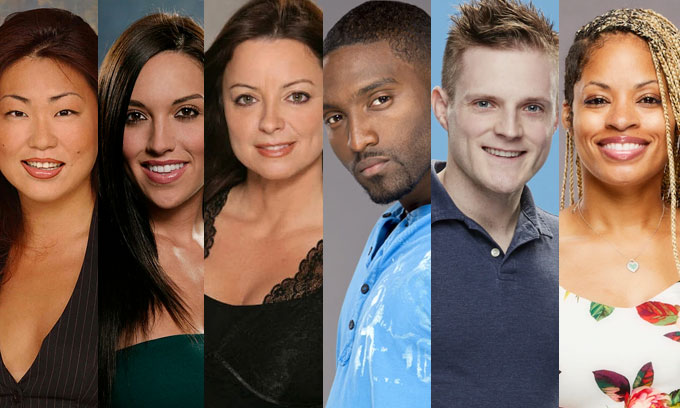 With all the Big Brother 25 rumors swirling about a potential season with returning players, particularly second chances, we decided to take a look at who we would like to see get a second chance at Big Brother from every season (starting with BB2 of course).

We realize that most of the older seasons aren’t likely to ever give us any returning players (and who knows why, really), but we can always hope. So let’s get to it.

Monica and Bunky. Both missed out on a chance to play again during Big Brother 7 (All Stars), so I would love to see them get another shot at the game, especially considering how much the game has evolved since they played over 20 years ago.

Danielle and Jason. I know we are talking about second chances, and Danielle did return for BB7, but I can’t write this and not pick her to get another shot at playing Big Brother. Arguably, one of the most-robbed players ever, we really need to see Danielle play modern BB. And who wouldn’t love to see the best duo in the show’s history reunite? I doubt Jason, who works in TV news, would ever return, but he’s definitely always going to be on my wish list.

Jun and Dana. So yes, Jun won BB4 and so she also wouldn’t exactly fit on a second chances season, but I NEED JUN TO PLAY AGAIN. It actually feels like a crime that she hasn’t been back on the show. I’m not sure it will ever happen, but I’ll never stop hoping. And I almost picked Alison also, but I thin after BB7 and TAR, Alison has had enough chances. Let’s see what Dana can do in 2023!

Karen and Nakmois. OK, the more I write, the more I realize I should have never said this would be a second chances season, because I’m picking a lot of people to return a third time. But I’m sorry, Jennifer “Nakomis” Dedmon deserves to be back on our TV screens. After her disadvantage on BB7, I think she should play again. And Karen is one of the most underrated players ever. I think someone who has fallen into obscurity like her would be so fun to watch walk through those BB house doors.

Beau and Ivette. It was hard not to pick Janelle, Kaysar or James, but I can’t keep picking people who have played more than once. So I went with Beau because he was the best part of the Nerd Herd and could bring some drama to the stage once again. And I picked Ivette because someone would need to be first boot.

Eric and Jen. First of all, I still can’t believe Eric hasn’t be brought back to play the game. He just seemed like such a natural for some kind of return season. And Jen is such good TV in the worst way, that I think she should definitely be back in that Big Brother house at some point. So why not now?

Shelia and Chelsia. I know for a fact that Chelsia would not return to Big Brother, but I would still love to see her play again. She grew up a lot after the show and was a part of SuperPass, the Big Brother Live Feeds company, and actually served as my boss for a bit. I think out of anyone, Chelsia playing again would be the definitely of a second chance. And Shelia was truly the best thing about BB9, and the least problematic, so bring her back!

Libra and Renny. Or Michelle. I was trying to keep my picks to only two per season, but I had a harder time picking between Renny and Michelle. Renny is funny, but not very good at BB. So maybe Michelle would be the better choice here. Regardless, I think we can all agree that Libra should be back in that house.

Ronnie and Chima. Much like Chelsia, Ronnie has grown up a lot since playing the game, and his time in BB11 was cut so short, that I think he could play the game much better than he did then. So again, he would be a true second chance choice. And so would Chima. Let’s face it, she never should have been expelled. Production totally screwed her over and pushed her to the limit. But even the line she crossed wasn’t that big a deal. It was one little microphone in one little hot tub.

Matt and Kathy. Much like Eric, I’m pretty surprised Matt hasn’t been back to play. I think Matt would be a pretty big target after his BB12 showing, but I think we need someone with his brain and boldness to play again. And who doesn’t want to see Kathy stuck in sludge again?

Adam and Dominic. This was a hard one because the best players have already been back. So I went with Adam, because now that he is a vet himself, I expect him to play the game without being influenced by other vets. He’s also been analyzing the game a lot since BB13, and I think could be a master in another season. And I went with Dominic because Shelly is too extreme for TV now and Kalia just made Twitter mad recently, so Dominic sounded like the best choice here.

Jodi and Britney. Not since Chima was a BB player so totally screwed over. So Jodi should get her chance to actually play the game. And I went with Britney because I love her and she should get all the chances at BB!

Candice and Howard. And absolutely no one else.

Zach and Donny. I know Zach has burned some CBS bridges, but I think he was just too immature the first time around. He was good TV, and I think now that he’s matured (into a life coach, mind you), he should get another shot. And come on, why hasn’t Donny been back? He’s even kept the beard this long.

Johnny Mac and Vanessa. I thought for sure we would she JMac back for BB22, but for some reason, we didn’t. So let’s bring the wacky dentist back, please. And even though I personally am not a fan of Vanessa’s paranoid gameplay, a lot of people think she deserves a second chance so why not. I mean who else am I going to pick, Meg?

Victor and Michelle. I don’t really want to see either of them play again, per se, but I don’t like any of the other choices, so why not…

Raven and Jessica. I am not a fan of Jessica and Cody, but I think Jessica could be a force without Cody by her side. And I would love to hear what new tales Raven could tell.

Scottie and Rockstar. I think these two deserve a second chance. I think both probably learned a lot from their BB20 blunders, and could really bring a lot to the table in another season. I also wouldn’t mind seeing Swaggy play again, and make it a bit farther in the game. His confidence was kind of astounding, so I would love to see if he would play the same kind of game.

Kemi. And no one else.

Tiffany and Claire. I loved how Tiffany played the game. We hadn’t seen that kind of strategy in years before BB23, so I think she should definitely be picked to play again. And I would love to see Claire play again since she knew she didn’t have a shot in BB23 and was more than OK with it.

Michael and Joseph. I’m going with the two guys who I think didn’t get a fair shot at the game because of the twists. Michael was put in a box right away and had to win his way to safety every week. And Joseph deserves a shot to actually make the TV edit and get credit for his gameplay. Michael would likely be a huge target, but it would be fun to see how many more comp records he could break.

OK, so this was exhausting and I’m sure I made some questionable choices, but they are my choices. So let me know yours! Who would you love to see return if Big Brother 25 ends up being a season of second chances?