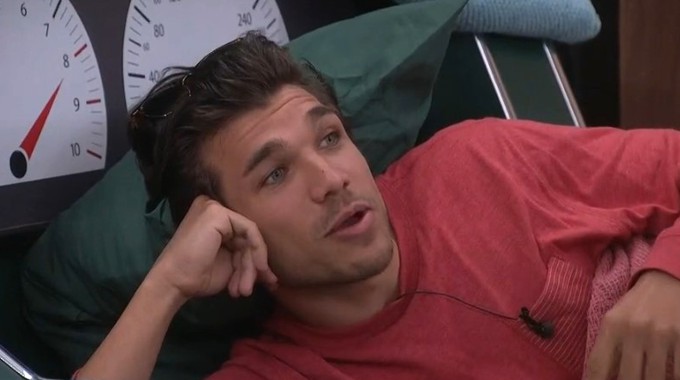 Pooch has put himself in quite an unenviable position this week on Big Brother 24 and it’s 100% his own doing which either makes it worse or just plain sadder. On the plus side, Pooch doesn’t seem to realize what’s going on around. Ignorance is bliss has been personified in Week 2 of BB24.

You’ll remember that last week was rolling ahead full steam with get-out-Taylor thanks to Paloma’s obsessive drive to eliminate her pageant contender. Didn’t work out so great for Paloma who ended up leaving on her own instead which basically pardoned Taylor and even seemed to reset Taylor’s position as House Enemy #1. Pooch didn’t get that memo though and was soon upstairs volunteering as tribute to Jasmine, the new HOH.

The women soon realized they had an opportunity here with Pooch offering to go up against Taylor and all they had to do was smile and nod for a few days until it was too late for him to do anything about it. Surely Pooch would eventually realize he’s in trouble, right? Right?? Nah.

Last night on the Live Feeds, Flashback to 12:06 AM BBT 7/19 on cams 1/2, Pooch chatted with Kyle about his chances of survival this week. Pooch is feeling pretty good about things and didn’t want to bother with asking about votes until Tuesday or Wednesday, you know like when the Veto is fully settled and you’re stuck on the Block apparently.

Pooch asked Kyle how his odds were looking and Kyle, who knows full well that Pooch is going, danced around the question even telling Pooch that the girls could rally. Pooch is unphased and thinks he’ll be good. He was even laughing that he was telling Turner, “when they keep me, they’re so f**ked.” Uh oh, Pooch. That probably isn’t going to happen.

Pooch tells Kyle that as he sat there with Turner in the HOH room the four women were just chatting about life in general rather than trying to talk the two of them up about game talk. He takes that as a sign that the women aren’t focused on the game and will make the wrong choice to keep him. Yikes again. Maybe they didn’t see a need to talk game with their next two targets.

It’ll be interesting to see who learns what and when. I’m trying to keep up with who knows what but so far Turner and Pooch are definitely in the dark and are heading for a bumpy night on Thursday. Or maybe that’s Friday. We still don’t know when this next eviction event will be filmed, but we do know we’ll see it play out on Friday night at a special 8/7c broadcast.

Do you think Pooch will learn of the plan before the vote or could we get another jaw-dropper eviction reveal on Big Brother?