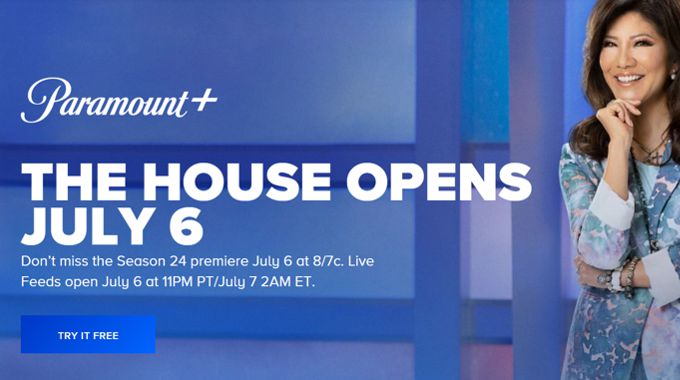 CBS has confirmed the Big Brother 24 Live Feeds will launch on premiere night, Wednesday, July 6th but for some of us it’s going to be very deep into the night.

Years ago Big Brother would start its season well ahead of the premiere and then when the west coast was done we’d join the Houseguests already well underway and we’d spend the rest of the season trying to figure out what the heck happened. Then things changed. With the arrival of a live premiere move-in for the Big Brother Houseguests we were soon treated to Feeds picking up within hours of the season’s start and that’s what we’re back to this year.

CBS is kicking things off at 8PM ET/PT on July 6th with a 90-minute debut where we’ll meet the Houseguests and watch them head into the house live as it happens. Then, as usual, we’ll have to wait for the west coast broadcast to complete before the Feeds come alive. But wait, not just yet.

We’re seeing a hard push from CBS on their new show “The Challenge: USA” which is going to be premiering right after BB24 that same night. And to make sure no one is distracted by the Feeds CBS is going to wait until that show has also ended that night out west before we can watch our new Feeds. So yeah, it’s going to be a late night as The Challenge won’t finish until 11PM PT (2AM ET). Have Mercy.

Update: It took less than a day for CBS to update their Feeds’ start time from 2AM ET (11PM PT) to ninety minutes sooner. That means we’ll be watching our Live Feeds starting at 12:30AM ET (9:30PM PT). That extra ninety minutes was the duration of The Challenge so the delay for that show may have been deprioritized. Nice.

So there you go. Live Feeds the first night but we’ll lose the first four and a half hours waiting for a combination of the west coast three-hour delay and The Challenge. Be sure you’re ready to go at 11PM PT / 2AM ET 9:30PM PT / 12:30AM ET and sign up for the Free Trial of Paramount+ now! You’ll help our site and our efforts when you use our links and banners. Thank you!

Get more Big Brother spoilers and updates all season when you join us on Facebook & Twitter and get our Big Brother App for notifications throughout the summer. Enjoy!