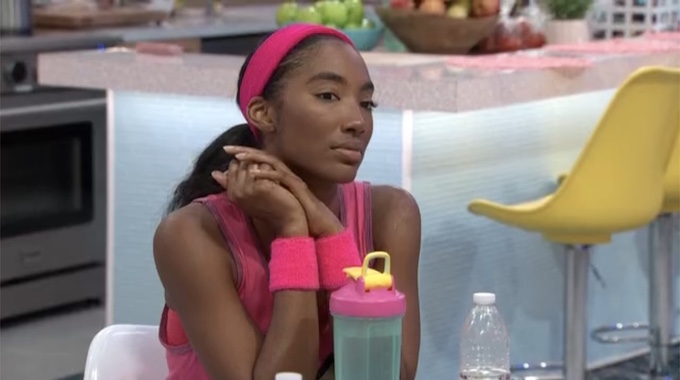 Friday inside the Big Brother 24 house, the houseguests got an early Power of Veto Competition. With the Veto results in, we found out which of the remaining four Big Brother houseguests would be the sole vote at Thursday night’s eviction. Find out what Taylor would like to see happen this week on BB24 and whether or not it will end up playing out that way right here!

8:05 AM BBT – Monte wonders why they had to wake them up at 7:15 in the morning. Turner is confused by this too. Monte mentions that he thinks the schedule at the end of the season usually gets a little wonky.

8:07 AM BBT – Brittany and Taylor are talking in the backyard and Brittany seems stressed about today. Taylor gives her a bit of peptalk and reminds her that one of them has to win.

8:27 AM BBT – Monte and Turner are talking about how Indy has spent almost as much time in the Jury house as the Big Brother house. Monte says that he could understand why she wanted to go home rather than to the Jury house.

8:31 AM BBT – Feeds cut to Adoptable Animals for Power of Veto Competition.

10:15 AM BBT – Feeds returned. The HGs are hanging around a smaller table which was installed either before or while they were playing the Veto. Monte won the final Power of Veto Competition and will be the sole vote this week.

10:42 AM BBT – Backyard reopens and the HGs head outside.

10:55 AM BBT – Brittany tells Taylor that logically she thinks Monte keeping her makes sense, but she doesn’t think that he is going to.

11:05 AM BBT – Brittany is in the DR and the rest are talking about how great the outcome of the Veto is for them. Monte says that he is overcome with emotions (securing his place in F3). Turner jokingly asks if he should be campaigning this week.

11:10 AM BBT – In between kisses, Taylor asks Monte if he knows that Turner will beat both of them in F2. He says he knows and kissing continues.

11:15 AM BBT – Taylor tells Monte that he knows what she would prefer to happen this week, but she knows that he ultimately has the final say. She says that regardless of who is in the house, she is going to pick Monte for F2. She adds that Turner is going to be harder to beat in the final comps.

11:22 AM BBT – Turner asks Monte if Taylor is still good with their F3. Monte says he is, but she is worried about how strong of a competitor Turner is. Monte says that he is taking Turner to F3 though.

11:25 AM BBT – Turner tells Monte that if he wins final HOH, he is bringing Monte to F2. Monte asks Turner just not to act too comfortable.

11:45 AM BBT – Brittany asks Taylor if she talked to Monte and Taylor tells her that he isn’t ready to make a decision yet. Brittany finds it hard to believe that he doesn’t know already. They have all thought about what they would do. Brittany says that she isn’t getting her hopes up because it doesn’t make sense for his game (to keep her).

11:50 AM BBT – Taylor offers to let Brittany hang out in the HOH while she is in the DR. After she leaves, Brittany says “I’m going home” and then adds “I don’t deserve her.”

11:52 AM BBT – Monte is out in the yard working out and camtalking. He says that he isn’t going to drag someone to F3 just because he thinks he can beat them. He says that if he brings Taylor and Turner, he at least knows that he will be brought to F2. He doesn’t trust that Taylor would bring him to F2 if he keeps Brittany.

12:55 PM BBT – Taylor is trying on her finale outfit to make sure it still fits. It does.

1:15 PM BBT – Turner and Taylor are talking in the HOH room. Turner says that he talked to Monte, who didn’t tell him what he was planning, but he feels good about Monte winning the veto.Taylor mentions that she thinks that Turner will be good come Eviction Night.

1:17 PM BBT – Turner tells Taylor that he is going to have a Taylor moment on Thursday and tell Brittany that regardless of whether she stays or goes, she is a walking L to him. They get a good laugh.

1:35 PM BBT – Monte, Turner, and Taylor are hanging out in the HOH room while Brittany is alone in the back bedroom.

1:40 PM BBT – The HOH crew is reflecting on the Veto Comp and talking about their strategies.

2:25 PM BBT – The HGs are all napping. BB plays the “Wakey, wakey houseguests” message. Brittany tells them she is awake, just thinking.

2:35 PM BBT – Brittany goes upstairs to find Taylor, Monte, and Turner all napping and she starts complaining that it isn’t fair and now they are going to be up all night. She adds that she is going to go to bed early because she won’t be able to hang. Then they are all going to form a F3 and she is going to lose.

3:00 PM BBT – Taylor, Monte, and Turner are all napping in the HOH and Brittany is napping in a lounge chair in the backyard.

While Taylor would like to see her F3 include Brittany, it seems as though Monte has decided to bring Turner instead. Brittany knew that she was in a do-or-die situation going into the final POV of Big Brother 24, but was not able to pull off the win. Monte has also let Turner know that he will be evicting Brittany at the upcoming eviction. While there is still plenty of time between now and Thursday night’s eviction, I don’t see Monte budging on this one.