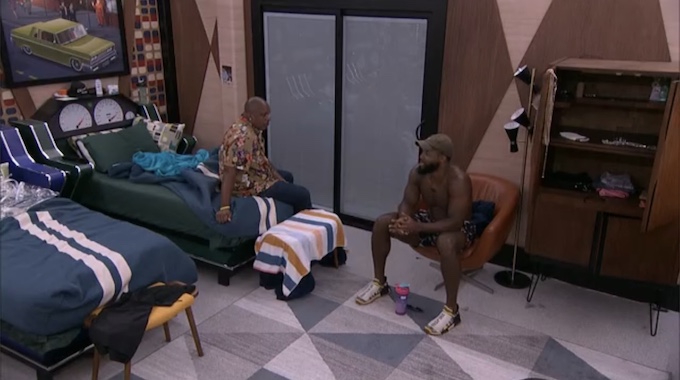 Monday was a much calmer day inside the Big Brother 24 house filled with a lot of reflection on Sunday’s events. The Veto Ceremony came and went and the target shifted to another Big Brother houseguest. Read on to get all the details of what took place inside the BB24 house right here.

8:50 AM BBT – Brittany asks Michael what his plan is for the Veto. He says that he is planning on using it on Brittany. She’s worried that if she stays on the block they might vote her out to get back at Michael.

9:02 AM BBT – Brittany tells Taylor that she is heartbroken over everything. Taylor says she did a good thing, but Brittany says she doesn’t know, because it’s hard to do a good thing when you could have done a better thing.

9:45 AM BBT – Alyssa is checking in with Kyle and asking if he slept okay. He says “not really, but it’s okay.”

9:50 AM BBT – Terrance is checking in with Turner to see where he is at. Terrance says that he isn’t concerned about the F2 that Kyle mentioned having with Turner. Adds that he is worried and apologizes if he was overly aggressive in anyway yesterday. Turner says that he didn’t think that at all and it’s far beyond him to feel any type of way about how he was feeling towards the situation. Feeds cut away from their conversation.

10:30 AM BBT – Alyssa tells Turner that she doesn’t know what to do or who to hang out with in the house so she came upstairs. Turner then gets called to the DR.

10:50 AM BBT – The houseguests are going around cleaning all the mirrors/windows in the house for production.

11:06 AM BBT – Michael gets called to the DR and everyone speculates that the Veto Meeting is coming soon.

11:14 AM BBT – Feeds cut to Adoptable Animals for the Veto Ceremony.

12:10 PM BBT – Feeds return from the Veto Ceremony. Michael used the Veto on Brittany and Kyle was renominated in her place. Kyle and Taylor are final noms for the week.

12:25 PM BBT – Terrance tells Monte that he has been thinking about the ramifications of Kyle’s actions and wonders if keeping him in the house might allow him to grow and learn rather than throwing him to the wolves. Monte mentions that the thing he struggles with is the trust component.

12:35 PM BBT – Terrance hopes that he hopes that Kyle is willing to learn before he leaves and change his perspective. Monte gives Kyle credit for admitting that what he said was rooted in race (during their House Meeting). Says it might lessen the repercussions for him compared to if he denied it.

1:00 PM BBT – Alyssa is talking to the cameras in the back bedroom. She tells us that she hopes that America sees that they are all learning, growing, and loving.

1:15 PM BBT – Terrance is talking to his family and says that doesn’t really want to talk about it but he is trying to be progressive, trying to change the narrative. He wonders if he is being too optimistic.

1:25 PM BBT – Terrance is talking about all the houseguests that have been evicted and thinking about how they all went for various reasons, but someone’s thought process was their agenda was being met.

1:35 PM BBT – Terrance, who is still camtalking, says that he makes great tv and says he is hilarious.

2:00 PM BBT – Taylor asks Terrance if Joseph really said that she told him Terrance was going to come after him when she hugged him? He says yes and he doesn’t know why. Terrance asks Taylor if they are going to keep taking shots at each other and she says she doesn’t want to. Taylor tells him that she never wanted to shoot at him until she thought that he was taking shots at her.

2:05 PM BBT – Brittany and Michael wonder if they should change their order. He says he isn’t sure, but he does know that they can’t take a shot at Turner next week. Brittany wonders if they do a F4 with Alyssa or Monte. He says that he isn’t sure what to do since they will be at F7 next week.

2:08 PM BBT – Brittany and Michael wonder if there is going to be another double. Michael says that days wise, he doesn’t think they need another double eviction. Michael wonders what Monte will do if he wins HOH. Since they feel that Turner has a pass through next week, he wonders if he would put Terrance and Alyssa up.

2:25 PM BBT – Turner wonders who has won the most competitions in a single season and whether Michael is on pace to beat that record. Michael doesn’t think so. Monte mentions that he thinks that Kaycee had six vetos (she had five).

3:00 PM BBT – Brittany tells Terrance that she genuinely appreciates the things that he brought to her attention yesterday. She adds that these things should have crossed her mind, but she feels bad that they didn’t.

The Veto Ceremony came and went and Michael used it the way we all expected and Turner put Kyle up in Brittany’s place. As of right now, it seems like Kyle is going to become the next juror for BB24 on Thursday night. However, there is still a lot of game left to be played between now and then. Make sure to come back for our daily updates to find out if there are any changes throughout the remainder of the week.