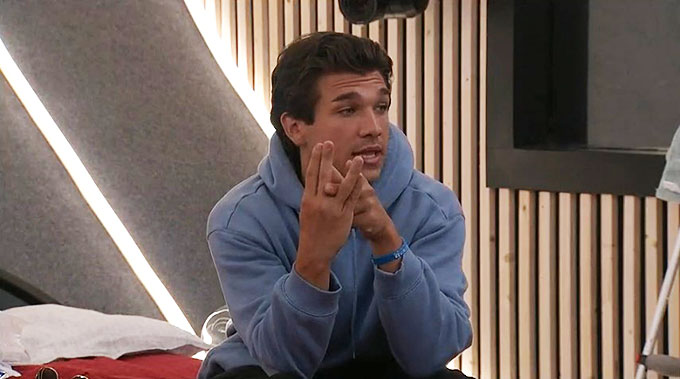 When Pooch offered himself up as a pawn to Big Brother 24 Head of Household Jasmine, he definitely didn’t think he’d be worried about counting votes come eviction night. But that’s just what he’s doing.

As of now, Pooch, Monte, Joseph and Turner are still pretty clueless on how the house is leaning, which as of now, is to vote out Pooch. Joseph is suspecting something is going down, but Pooch thinks at the worst, it will be a tie and Jasmine won’t vote him out when she has to break the tie. But as we know, he’s pretty off on all of that. There won’t be a tie, because he likely won’t have that many votes. So let’s take a look at where the votes seem to be at the moment.

Even Kyle, who Pooch is certain he has, has said that he will probably vote for Pooch to go since that’s where the vote seems to be going. Brittany encouraged Kyle to do so by telling him that would put him in the good graces of the women. Terrance is also on board with sending Pooch out, despite Pooch thinking he has Terrance on his side.

There’s a possibility someone might throw a vote to mess someone’s game or try to secure their spot on both sides, but as of now, it’s not looking good for Pooch. Everyone is aware there is a guy’s alliance, and now word is getting around that Pooch is the head of that snake. So I don’t see him working himself out of this even if he does catch wind he doesn’t have all the votes he original thought he did.

Reminder: The eviction is still Thursday night, but we won’t be seeing the episode until Sunday.

Who do you think will be the first official Big Brother 24 houseguest to be evicted from the house? Take our poll below to let us know.