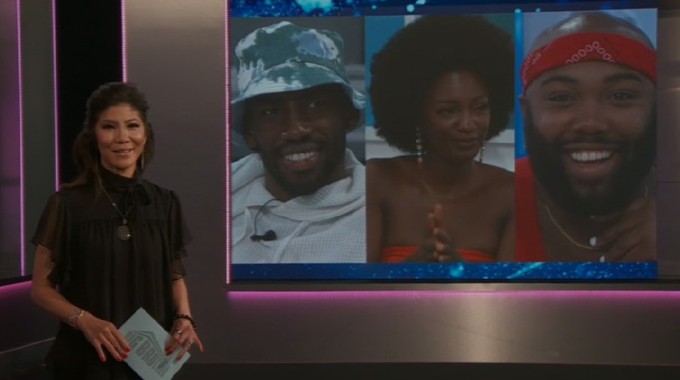 We’re just two days away from the Big Brother 23 finale when one last Houseguest will be sent out the door to join the Jury and vote to crown a winner of Big Brother with the largest cash prize ever offered up by the series with $750,000! That’s so much money!

There’s still a lot to unravel with the Jury on how they’d vote, and Branden is breaking that down in another post, but who do you want to see make the Final Two? Who do you think has earned that spot or maybe who do you think would create the most chaos for the Jury’s decision if they end up in those last two seats?

Should it be Xavier, who spent the season playing the alliance “dad” and kept the Cookout playing nice? Maybe Azah who used her social game and a low profile to make it to the end while seeing threats like Tiffany and Hannah taken out before her. Or maybe the season’s “mastermind” in Derek F who says he’s been pulling strings that no one else but him may have even seen?

Let’s run through our poll here and then share your thoughts below in the Comments section on your pick. Do you want an underdog pairing in the F2 with Azah + Derek? Or maybe the easy Jury decision with Xavier + Derek? And then there’s the seemingly unlikely combo of Xavier + Azah as both seem intent on taking their sacrificial ally Derek to the end. Make your pick and share your reasons!

Is the poll missing? Click here to reload the page.

Join us back here on Wednesday, Sept. 29th at 9PM ET for our live coverage of the Big Brother 23 season finale to find out who wins BB23.