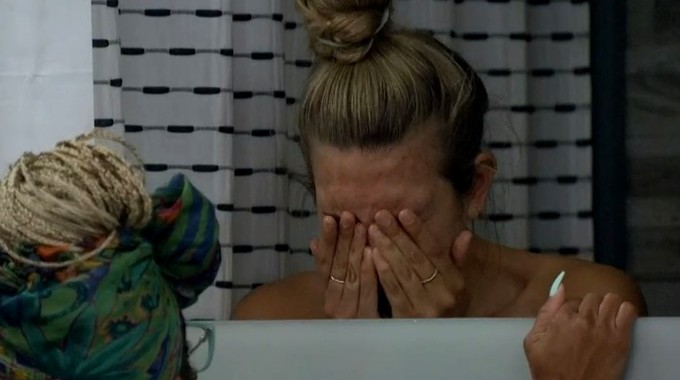 We’ve got your Big Brother spoilers for BB23 with everything that’s gone on inside the BB23 house since last Thursday’s live eviction show that ended with Sarah Beth taking over as the new Head of Household, basically an extension of Kyland’s outgoing HOH. Well so much for something new this round! Read on for the latest spoilers you may have missed over the weekend.

Nominations:
Remember last week when Kyland put up Claire and DF? Yeah, well guess who Sarah put up after a multi-hour brainstorming session with Kyland overnight leading into the early morning Noms Ceremony. Yep, no surprises here. But neither of the noms are the target and DF was definitely not going to be sent out the door with the Cookout in control of the votes.

Read more on who was nominated in Week 7 >>

High Rollers Room:
Second round of the three-part twist and this week’s power up for grabs was the Renom Roulette. With those BB Bucks rolling out there were enough in the mix for HGs to compete and sure enough it was won and put into play changing up Sarah’s nominations and putting a member of the Cookout into the danger zone.

Power of Veto Competition:
Just the one Veto this week unlike OTEV last round and with Sarah’s plans set on a Backdoor it could all come down to whether or not her target got a chance to play for the Veto after passing on the High Rollers twist. Sure enough, the draw went in her favor as did the Veto results.

Power of Veto Meeting:
Just like last week, we’re expecting a renom at the Veto meeting on Monday because the medallion holder is definitely putting it to use. When that seat opens on the Block it’ll be Derek X heading up and most likely out on Thursday to join Britini in the Jury. He made a good run at it, but let’s be real here that the Cookout controls the game and wasn’t going to let him get much farther whether or not he had made it through Week 7.