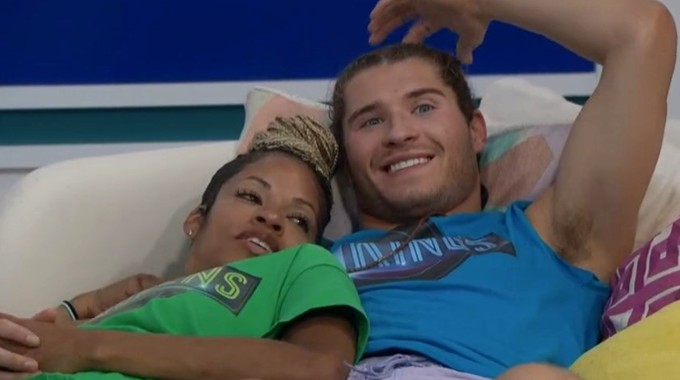 Another weekend’s worth of Big Brother spoilers here for you as the BB23 HGs have been busily playing along since the last episode on Thursday night. We’ve had Wildcard, target scheming and debating, Nominations Ceremony, and most recently the Veto competition itself. Now we’ve got those out of the way, pieces are aligning for Monday’s Veto meeting and then we’re off to the next eviction. Catch up on everything that’s happened in Big Brother 23 over the past few days.

Wildcard Competition:
Final round of the Wildcard Comp twist had the Queens, Aces, and Jokers facing off for the chance at safety plus an unknown twist on that perk. Whitney lucked out into this being her week to play for the Aces and she really needed to pull off the win… but she didn’t. Claire grabbed that for herself.

Going along with the Wildcard win was the opportunity for Claire to either take one-week safety for her whole team (Queens) or safety for just her until Jury. Wow! And Claire picked…

Nominations:
Christian kept the power with the Kings again this week after Xavier’s win last week. So no surprise that there were a lot of the same players in the mix to try and influence how these noms would go. Whitney was the top choice for most of the HGs but we also saw Sarah pushing hard to get Hannah out the door. No need to rush that decision though, so Christian just went ahead and put them both on the Block.

Read more on who was nominated >>

Power of Veto Competition:
Whitney missed out on the Wildcard safety so the Veto was her backup. Once she hit the Block Whitney knew this was ‘do or die’ for her game so the pressure was on. When the Feeds returned on Saturday we learned it wasn’t her shining moment. Instead, Christian managed to pull off yet another comp victory as his target grows larger each week.

Read who won the Power of Veto >>

Power of Veto Meeting:
Christian holds both the HOH role and the medallion. He won’t be changing his own nominations come Monday’s meeting. Watch for the medallion to go back in the box and both Hannah and Whitney to stay on the Block to face Thursday’s vote.