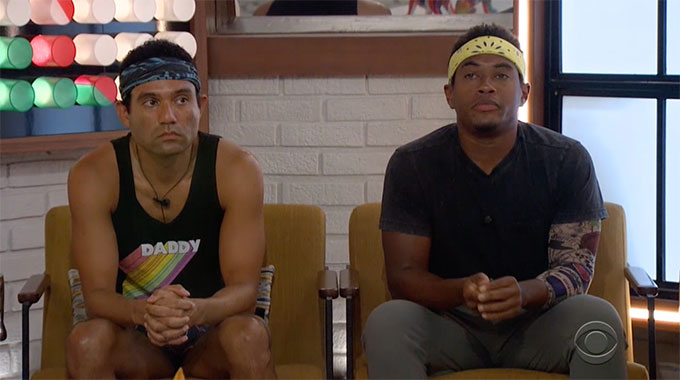 It’s triple eviction day in the Big Brother 22 house, but once again, there isn’t going to be much suspense for the first eviction. David and Kevin find themselves on the block once again, and since Kevin is the target, Kevin is going to go.

There’ always the possibility that someone might get some kind of revelation while the feeds are down today and flip the vote, but we haven’t seen that happen once this season, so don’t count on it. Kevin is the target so he’s going to be the first one out the door tonight. Bet on that.

For a moment, Dani and Nicole were feeling around to see if they could keep Kevin, but that didn’t last long as soon as their boss Cody heard about it. Everyone is playing Cody’s game, so what Cody says goes. I wish there was more to say on this, but that’s the bottom line. Kevin campaigned (while David didn’t), but to no avail. I could talk in circles to fill more space here, but let’s face it Big Brother 22 is a snooze and we can’t pretend like anything crazy is going to happen with this first eviction.

So let’s just focus on the other two evictions. Will David be the next target or will the Committee eat one of its own? Dani has been tossed around as a target by Christmas and Nicole (despite being her closest ally). But Christmas has also been tossed around by Cody and Dani. And then Enzo and Tyler had a low-volume conversation about sending Nicole out if the opportunity presents itself.

Let’s check what our readers have predicted for this first eviction. Based on our weekly eviction poll, more than 87 precent of those voting think Kevin is toast. And we agree.

Be sure to check back in with us tonight as we cover the Big Brother All-Stars Triple eviction live. And you won’t want to miss out on the Live Feeds are they promise to be more dramatic after tonight’s festivities.