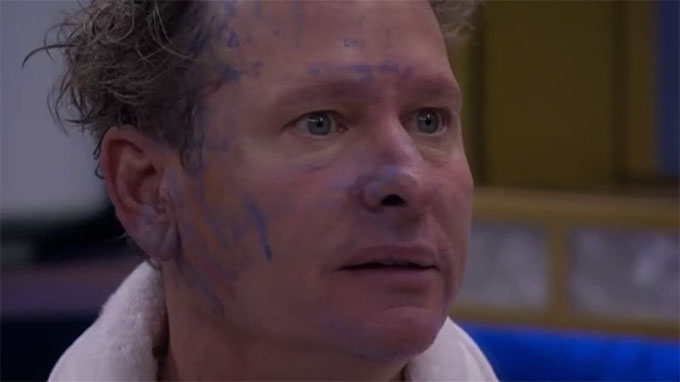 A major power shift happened in the Celebrity Big Brother house Friday night after the live eviction and the Endurance HOH battle played out on the Feeds. Read on to find out who is rejoicing and who is sweating after the Head of Household competition.

8:08 PM BBT – Carson is the new HOH and he tells Cynthia he had to make a deal with Todrick on the wall. He says he wasn’t going to nominate Todrick anyway.

8:09 PM BBT – Todrick tells Shanna that Carson said he wouldn’t put him up or backdoor him and asks if he would lie about that. Shanna says no, if he said that he means it.

8:29 PM BBT – Shanna and Cynthia hug and say “we did it!” Shanna says she is so happy they’re safe this week with Carson as HOH.

8:30 PM BBT – Carson, Shanna, and Cynthia celebrate his HOH win. Carson says it was a miracle.

8:31 PM BBT – Carson confirms that he is definitely nominating Miesha but they will have to strategize on who the other nominee will be. Carson says Miesha congratulated him on his win but she definitely wasn’t happy.

8:35 PM BBT – Carson says he can’t wait to use Miesha’s quote she used on him at the nomination ceremony. Shanna says just to see Miesha’s picture show up on the nomination wall will be the highlight of the game.

8:36 PM BBT – Carsons says the nominations will probably be Miesha and Todd, so at least they can get rid of one of them.

8:38 PM BBT – HGs having dinner and talking about the HOH competition.

9:08 PM BBT – Miesha tells Todrick that it all comes down to veto. She says if she doesn’t win she’ll go home. Todrick says he needs to win veto and asks Miesha if she thinks Carson will honor his deal. Miesha says yes.

9:11 PM BBT – Todrick is blaming this all on Chris Kirkpatrick. He says if he wouldn’t have pulled that move this week with Shanna, Carson would have left and Todrick would have won this HOH. He says if Miesha leaves, he is toast. He says he would have to win every competition to get to the end.

9:12 PM BBT – Miesha says they need to win veto and then Carson can’t play in the next HOH so they can get him then. She says it was so hard to watch that competition because she would have done really well in it. Todrick says she would have won.

9:20 PM BBT – Shanna tells Carson that his win was amazing and how much they needed that. Carson says he did not appreciate Miesha sitting at the table with her sunglasses the other night.

9:40 PM BBT – Carson assures Todrick that their deal is good.

9:45 PM BBT – Todrick continues to worry and asks could he get BD’d if Lamar wins Veto and saves one of the noms. Carson says he doesn’t think that’ll happen, but he would let Todrick know if that was going to happen.

9:50 PM BBT – Todd expects to be nominated and tells Miesha that he thinks he’d be evicted in a tie situation. Miesha says he’s wrong and it’d be her instead. Miesha confirms to Todd that Todrick made a deal on the wall with Carson. Todd is disappointed to hear that and says he’ll definitely be nominated then. Todd says he wouldn’t go making deals.

9:55 PM BBT – Lamar learns about Todrick making the deal with Carson. Todd explains that as long as Miesha is on the Block then either of them would be safe up there too.

10:25 PM BBT – Shanna tells Carson that Kirkpatrick followed Miesha for so long in the game because he was fangirling over her.

10:40 PM BBT – Carson tells Shanna that he’ll be ready to break a tie against Miesha.

10:50 PM BBT – Carson says he did not promise Todrick that he wouldn’t BD him. Shanna wants to tell Todrick not to use the Veto on Miesha if he wins it.

11:10 PM BBT – Shanna explained OTEV to Carson and Cynthia. Shanna is fearful of that particular comp.

11:15 PM BBT – Todrick admits he was going to fall whether or not Carson made that deal. He’s frustrated that he’s failing at the comps because he doesn’t fail at things.

11:25 PM BBT – Cynthia and Shanna are glad they can relax for a change and see the other side have to sweat like they did.

12:25 AM BBT – HGs have gathered for Carson’s HOH room reveal. All but Miesha attend. Miesha stayed downstairs and then asked Todrick about it when he returned.

12:40 AM BBT – Cynthia and Shanna discuss possible noms. Cynthia will be happy with whoever is good for Carson, but she would like to see Miesha up there.

Well that was an exciting turn of events. After it looked like Todrick would likely outlast Carson in the HOH comp the whole game landscape changed and we have our classic Big Brother power shift! This round will only last a few days though so get ready for Noms this weekend and Veto + Eviction on Monday night.