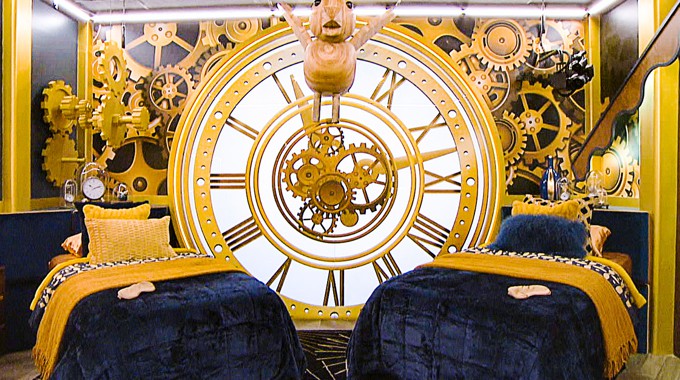 Welcome to the Celebrity Big Brother 3 House as the new season start is just days away from CBS’s premiere night on Wednesday, February 2nd! Step inside and let’s see what Big Brother has for us in the CBB3 season.

The Houseguests have gone through the big main doors and are on their way through the four week season already, so be sure to Meet Your CBB3 Houseguests! We’re just days away from the start of the season on CBS, but first, we need a house!

The Celeb Big Brother house has gone with a ski lodge design and it looks pretty great. I like this one a lot. One interesting structural change now is that the spiral staircase is gone! Instead, the stairs come down across where we used to see the giant slider doors. Those are covered up with dual hinged doors instead.

Remember the backyard is pretty limited during CBB as production keeps the back portion closed up for staging and construction while a narrow area is allowed for constant access and use with the hot tub and fireplace. Very nice.

Check it all out in the gallery pictures below and the video tours released so far. I’ll keep adding more and we should have the official CBS photos later today too, but for now these should be great to enjoy and see around the new house.

This season’s #BBCeleb house is full of cozy vibes —here’s your sneak peek before the premiere on Wednesday, Feb. 2 at 8/7c on @CBS! pic.twitter.com/yNg4PYJuqU