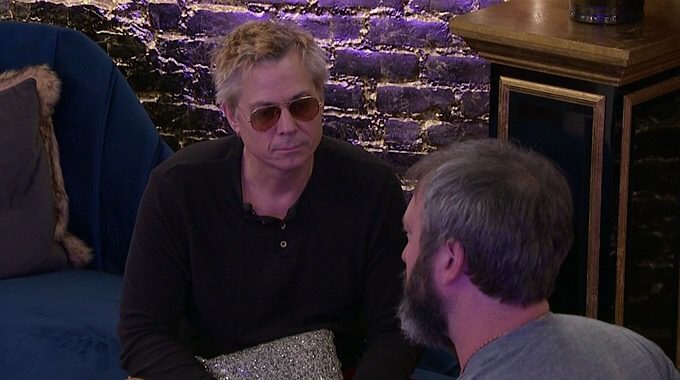 We started the day in the Celebrity Big Brother 2 house getting a feel for what Tom thinks about the POV comp results and what he is planning for the POV Ceremony. We also found out from the Veto Winner what they planned to do during the POV Ceremony. Things have the potential to get interesting throughout the next couple days leading up to the eviction. Find out here what was happened on the Celebrity Big Brother live feeds!

9:14 AM BBT – Lolo telling Natalie and Ricky that she tweeted “the alliance shouldn’t have been named Team Fun, it should have been Team Run.”

9:15 AM BBT – Kato and Tom are talking about the comp and talk about how Lolo bluffed having asthma during the comp. Tom isn’t buying that an Olympic sprinter couldn’t spin around five times without getting winded. Kato thinks that Lolo tried her hardest and was getting winded, but Tom isn’t convinced.

9:18 AM BBT – Tom thinks that because Natalie picked Tom for the second time in the comp, they were clearly gunning just to beat Tom in the comp. Tom says that wasn’t a team move and still thinks that Lolo threw the comp. Tom knows that if Natalie doesn’t use the POV that means she is trying to protect Ricky. Tom also says that it doesn’t matter because they can still get Joey out this week.

9:22 AM BBT – Tom says he wouldn’t be surprised if Natalie or Lolo end up winning HOH and they (Tom and Kato) end up on the block. Kato is trying to give them the benefit of the doubt.

9:30 AM BBT – Tom and Kato talking about what happens if someone uses the power to get off the block. Tom is talking about putting Dina on the block and then it turns to what would be the most insane thing to do if Joey ends up off the block. Tom says putting Lolo up and she would get voted out and Natalie would be alone with just Ricky. (This is just another hypothetical scenario that Tom likes to throw around)

9:45 AM BBT – The conversation between Tom and Kato is still going around in circles between BD’ing Ricky, how Lolo and Natalie are turning against them, how they will just vote Joey out this week if they don’t use the Veto, and how Tom wants to feed false information to Lolo and Natalie.

10:03 AM BBT – Lolo, Natalie, and Joey are talking in the kitchen and up in the HOH room, Tom and Kato are thinking that they are doing what Tom told them to do. (He told them to be nice to Joey so that when they keep Joey and BD Ricky, Joey won’t target them.)

11:04 AM BBT – Tom and Kato are talking about how Lolo didn’t say anything to Tom. Tom mentions they will see how it goes and Kato wonders what will happen if they won’t talk to them. Tom says “that means there is a problem.” Kato thinks they will talk to them, just haven’t yet.

11:05 AM BBT – Lolo and Natalie are in the bedroom, Lolo is resting, Natalie is putting on her makeup and Dina walks in. She starts a conversation about the under eye things that Brandi wore last season and then leaves. On her way out, Natalie tells Lolo that Tom and Kato are right in the other room looking like they want to come in. She wonders if Tom send Dina in there to see what they were doing.

11:18 AM BBT – Lolo and Natalie are talking about the POV Ceremony. Lolo wonders what time it will be at and adds that they don’t have anything to do all day tomorrow. They also suspect that there are two evictions happening next week.

11:23 AM BBT – Natalie and Tamar are whispering in the bathroom. Natalie tells Tamar about Dina coming into the room while Tom and Kato were outside the room. Tamar asked what was wrong with them, Natalie shrugs and tells her that they haven’t even approached her yet today.

11:31 AM BBT – Tamar and Natalie are talking. Tamar mentions that Dina is allowing herself to be used (she is currently cooking and talking with Kandi) and Natalie asks where else is she supposed to go? The conversation then turns to Tom and Kato wanting to put Tamar and Ricky on the block to weaken Lolo and Natalie’s numbers. They talk about how Tom was really hung up on who has the power.

11:57 AM BBT – Dina and Ricky are talking in the kitchen. Dina mentions how being in the house has been a wild ride, but has also given her the chance to get away from the chaos in her everyday life. Talk turns to Dina talking about her family.

12:04 PM BBT – Dina says she forgot to pay her bills before she left for Big Brother.

2:11 PM BBT – Natalie confirms to Tamar that she is not using the veto. She says it just not make sense for her to use it.

2:20 PM BBR – Lolo and Natalie think it’s odd that Kato and Tom aren’t talking about using the veto anymore after how obsessed with the plan they have been. Talk turns to whether or not Dina has the power. Ricky comes in and they decide they cannot let Kato or Dina win the next HOH competition.

2:48 PM BBT – Kato tells Tom that it’s clear the girls don’t want Ricky up and that they will just vote Joey out so they might as well just get on board with that (that is not the plan the girls have). Tom says he is pretty set on not having to put anyone else on the block this week so he’s now OK with the veto not being used.

3:00 PM BBT – HGs hanging out if a few different spots in the house. Just general chit-chat.

So it sounds like when the Live Feeds return from the veto meeting, we will learn that Natalie did not use the veto, and as of now Kandi is the secret target among Lolo, Natalie and Ricky. That also means Tamar has her power for the next round.