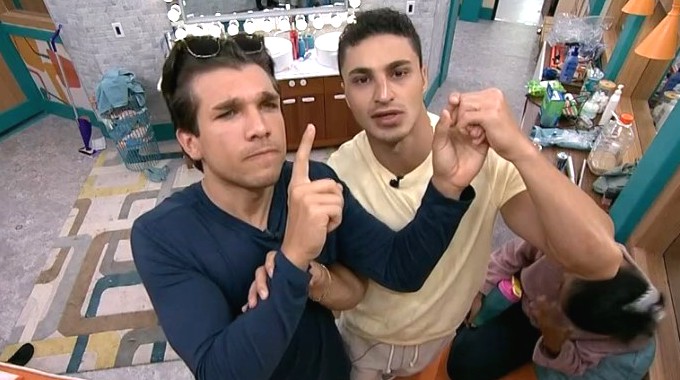 We’ve got all your latest Big Brother spoilers for everything happening in the Big Brother 24 house since Thursday’s live show with an HOH comp, the nominations ceremony, and even the Power of Veto comp. It’s been busy in there and the HGs are already planning way ahead of all this too so catch up on the latest and be ready for the week ahead of Big Brother episodes.

Head of Household:
With Daniel stepping down it was time for a new HOH and with production’s quick thinking following Paloma’s dropout they made a fast move to split up the HOH comp into two parts. Instead of what was once to going to be an elimination battle (in lieu of an eviction vote) the HGs ran a series of knockout rounds to get a smaller group for the second part, the original HOH comp plan. It took us deep into the night but we find out who had won out as the new Head of Household:

Read who won Head of Household in Week 2 >>

Nominations:
Listen up. Don’t ever volunteer to go on the Block. Just don’t do it. Case in point, meet Pooch. He is a Houseguest this season on Big Brother where people on the Block can get voted out. But don’t tell him that or you might ruin his fun. See Pooch thought the whole house was still rallying to get out Taylor after Paloma’s little explosion, but getting served up an eviction opportunity like Pooch is too good to pass up, right?

Read who was nominated in Week 2 >>

Power of Veto Competition:
HGs have their target in mind but now they need to get him out the door and the Veto is still in the way. Gotta pull off a win here to secure your safety or lockdown your noms. So which side won out in the latest Veto medallion race?

Power of Veto Meeting:
The Veto meeting is coming up on Monday and we’ve got a fairly clear idea of what’s ahead. HGs have been debating their options but mostly holding to the original plan and that pawn has started to sweat the outcome after realizing the mistake that’s been made. Oops! Either way, watch for the medallion to go back in the box and the Noms to hold their current spots.