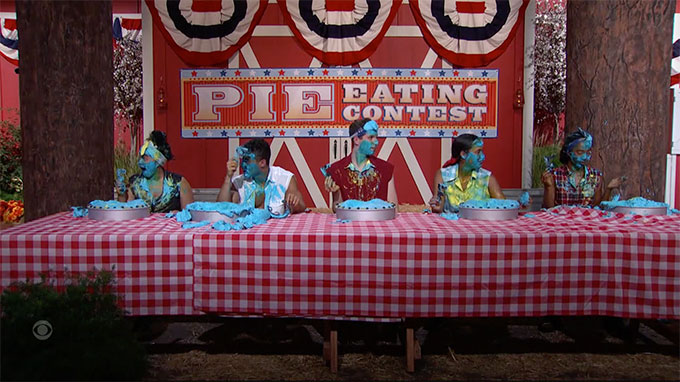 The new Big Brother 24 Head of Household ate her way to a victory and immediately decided to go for everyone’s previous target Taylor. But when Pooch came forward with a plan to be the pawn this week, some of the other houseguests couldn’t help but think him offering himself up on a silver platter might be too perfect to pass up.

This week’s episode picks up right after the HOH qualifier (aka the competition they had ready to go for Thursday night’s Backstage Boss competition that got canceled).

Daniel brings up the fact that none of the people he put on the block this week (Michael, Taylor and Terrance) went home, so he has at least two reason to be afraid this week since Michael and Taylor will be playing in the HOH competition.

And then we get a peek at what we missed while the Live Feeds were down during Paloma’s self-eviction. Apparently with Paloma gone, the six-person alliance decided to replace Paloma with Nicole. And she seemed to be on board.

It’s time for the HOH competition. Michael, Taylor, Joseph, Kyle, Jasmine, Ameerah and Monte are players who qualified to play. And for this competition, they players are at a pie-eating contest, Big Brother style. They have to answer true or false questions and then they have to search through their pies using their mouths to find a T or F to represent their answers. The two people to answer last each round will be out. 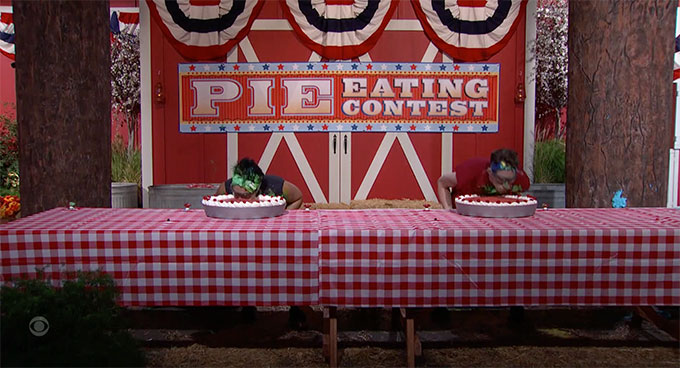 For round 1, everyone got the answers correct, but Kyle and Monte were last to answer and are out.

And for round 2, everyone is correct again, but Taylor and Jospeh were last and are out.

For round 3, the remaining players Ameerah gets the answer wrong. That leaves Jasmine and Michael in the final round.

And Jasmine finishes first and is correct. So she is the new Head of Household.

Soon after the HOH competition. Nicole lets Daniel know about that 6-person alliance. She let’s us know that she is sticking to that Final 2 deal more than anything else, which is why she told Daniel.

Meanwhile, Pooch for some reasons still really wants Taylor out and wants to be a pawn to make sure Taylor can go on the block and stay on the block. So his plan is to volunteer to be a pawn so that he can win the veto and block Taylor from winning.

Amerrah, Alyssa and Michael discuss Pooch’s plan and agree they don’t need to worry about Taylor, so they can target Pooch and get him out instead.

Jasmine still wants Taylor out, but since I don’t think she even really knows why that is, it shouldn’t be hard to get her to target Pooch. And since he’s volunteering to go up, it’s an easy move for her. 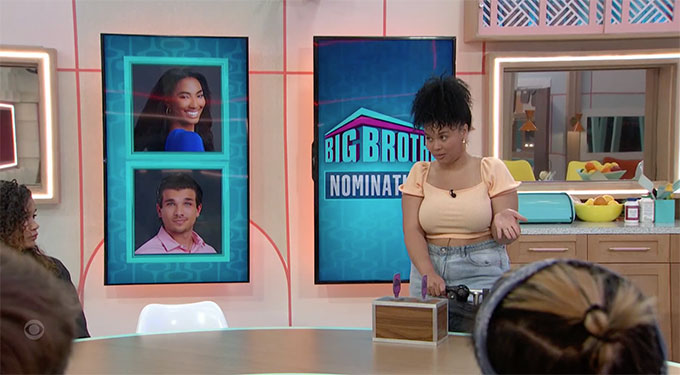 And Pooch takes his idea to Jasmine. He thinks it’s a great idea. But the rest of his idea is Jasmine put up himself and Brittany and then they backdoor Taylor. But again, Jasmine is focused on Taylor, but lets us know in the Diary Room that she wouldn’t care which of them goes home, really.

So let’s get to the nomination ceremony and find out. Jasmine does still put Taylor up next to Pooch.