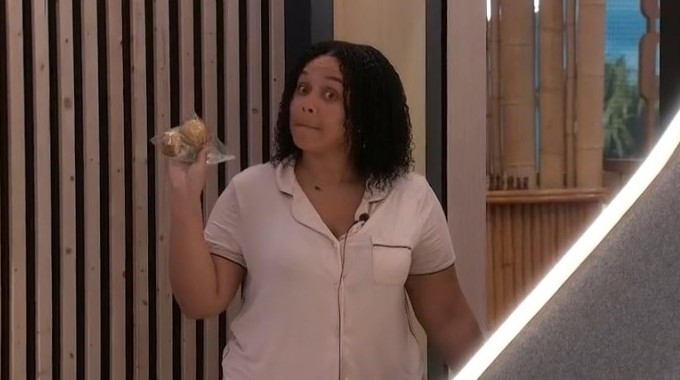 This is a standalone issue and it’s one that will shake the very halls of Big Brother 24 history. Muffingate. Stop your laughing, this is no joking matter. This a matter of life and muffins.

No Houseguest has faced more challenges in Big Brother than Jasmine Davis. I say this jokingly because she just might be the most absurd HG of the season, but that’s what makes it fun. Though if you asked Jasmine, I think she’d agree, she’s had it harder than any HG ever. Maybe this season. Well, probably not. But any way, this is bigger than Jasmine, this is about a muffin or at least what’s left of it.

To set the stage, Jasmine has just spent the week on Slop as a Have-Not along with Turner. She nearly lost the will to Big Brother, but somehow managed to pull through. Now with her return to food Jasmine excitedly set aside two muffins in a Ziploc bag in the kitchen. Disaster soon strikes.

Flashback to 3:32AM BBT 8/4 on Cams 1/2 (sign up for the Free Trial) to find Jasmine entering the bathroom, clutching the remains of not two muffins, but instead one and a half of a muffin. Who ate the half of her muffin, Jasmine demands to know. HGs stare blankly and no one can answer. Nicole says she definitely put two in the bag for her and left it by her cup in the kitchen. When Jasmine returned from her shower and a visit to DR, half of one muffin was gone. GONE!

With no one owning up to the damage, the pure destruction they’ve caused, Jasmine hobbles her way upstairs to the HOH room. It takes her two minutes, but she gets there. Jump ahead to 3:34AM BBT on Cams 3/4.

Jasmine arrives to the HOH room where Joseph and Monte think she’s coming to discuss the upcoming vote. We don’t have time for such trivial matters as $750K. We need answers. Muffin answers.

“Who ate the half??” The Muffingate interrogation begins as Jasmine throws open the HOH room door and waves the once heavier bag. Monte and Joseph have no idea what’s going on. “Muffin?” asks Joseph. “Was it you, Joseph??” He quickly denies the allegation. Joseph swears he would never do that to Jasmine. She explains that everyone is denying it and she is seriously upset. Jasmine is not kidding around here.

Joseph tells Jasmine he almost came to ask her if he could have the other half after he saw she had eaten just part, but he would never take it without asking. Plus, Joseph points out, he’s not one to leave something partially eaten. If he had done it, he would have eaten the whole thing. Jasmine says someone is lying to her and recounts the series of events. Jasmine saved the muffins, Nicole bagged them and set them on the table, and then when Jasmine returned… half of one muffin was gone!

Jasmine is exhausted and says this is the second time this has happened to her. She rests on the couch, surely overwhelmed by the atrocities she’s experienced and endured tonight. With no answers yet Jasmine must continue her search for the truth. For justice, if you will.

So what did happen? Jump ahead to 4:12 AM BBT Cams 1/2. Turner is sitting with Taylor and plotting next moves. Taylor mentions she thinks Jasmine is playing them. Turner agrees, “and that’s why I ate her muffin.” Ah hah! The culprit is found! Turner has also made this admission to Joseph, so the truth is out there.

But wait, there’s more. Move ahead again to 5:15 AM BBT 8/4 Cams 1/2. Turner has arrived in the kitchen. The muffins, bagged, lifeless and tattered, lay on the kitchen table. They’ve never been more vulnerable than they are now and the killer Turner knows it. Turner whispers to his mic, “what to do with the muffins? I don’t know if I should eat half the muffin because it’d be funny, or if I should let it live.”

Finally, Turner makes his decision. “A half of a half… it’d be pretty iconic.” He slowly makes his way across the kitchen, the fork sliding out from where it was once concealed. Piercing the muffin’s remains Turner turns to the camera and says he’s coming to the DR, he’s got things to say. And soon he’s gone behind the door, carrying a quarter of a muffin, and what’s more, a message no doubt.

Okay, obviously this is a prank that is meant to rile up Jasmine but cause her no harm. Turner mentions he doesn’t want to be cruel by doing this, so he is actively considering the limits of what Jasmine may accept. Overall, this is a good prank and it is harmless, contrary to Jasmine’s claims. She’ll be okay. More muffins can be made, but the damage, it’s done. And as we joked earlier, Turner won’t have to run too fast if Jasmine finally figures out who caused Muffingate.