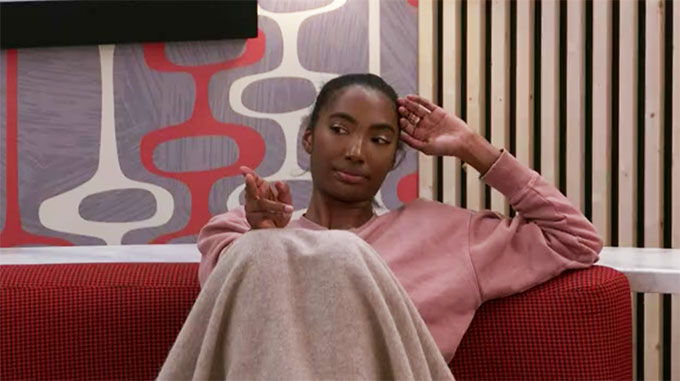 Despite it being Nomination Day in the Big Brother 24 house, the houseguests had a pretty low-key evening as another backdoor plan was set into motion. There was some talk about what could or should happen if the veto is or isn’t used, though. Oh, and Jasmine continues to be frustrated with Turner for touching her muffins.

4:38 PM BBT – Jasmine is upset that Turner touched her muffins. She says she doesn’t want anyone touching her stuff and says no one wants his “nasty ass hands that hasn’t showered an entire week touching my muffins.” Jasmine says people should respect others’ wishes and things.

4:46 PM BBT – Jasmine and Indy both say if noms stay the same this week they won’t vote out Joseph. Jasmine says she’d vote out Monte.

6:06 PM BBT – Terrance tells Daniel best case scenario is Daniel plays veto, wins and keeps noms the same. Daniel says of the three of those noms, there’s no reason anyone should want Terrance to go over Monte or Joseph.

6:10 PM BBT – Terrance says he could actually try to sabotage the veto competition so they don’t win.

7:44 PM BBT – Taylor says if Daniel goes and she wins HOH next week, she would send Terrance home.

7:50 PM BBT – Brittany, Taylor and Michael discuss if they think Turner would want to join them or Monte and Joseph when it’s time for their alliance to turn on each other. They aren’t sure what he’d do but Michael thinks Turner would want to take a bigger shot at the guys than at the three of them.

8:00 PM BBT – Taylor says she would’t mind Monte touching the block on eviction night. She says he needs to feel some vulnerability in the game.

8:08 PM BBT – Taylor says that Daniel being on jury might be good for the three of them. Brittany asks in what way. Taylor says he is targeting them for a reason and respects the game and would vote for a respectable game.

8:10 PM BBT – Brittany and Taylor decide it’s too risky to keep Daniel around.

8:12 PM BBT – Brittany mentions Daniel might not have a job when he gets out of the house. Taylor says yeah, there’s been some strong suggestions where the outside world is against him. Taylor says she’s worried for him.

8:28 PM BBT – Michael asks Brittany and Taylor if there’s any chance the house flips on Kyle if he puts him and Daniel up. He says that would be worst-case scenario. Taylor says she doesn’t see that happening this week. Brittany doesn’t either.

8:30 PM BBT – Taylor says she it’s clear it’s going to be Daniel or Alyssa this week (though she would prefer Indy over Alyssa), so it’s going to be her or Kyle sitting on the block. Brittany says that Alyssa going helps them because it frees Kyle from her. Brittany says she’s not saying Alyssa should be the target, but if they need a backup she could be the backup target.

8:35 PM BBT – Michael wonders that if Daniel does win veto, would it be better to just ask him not to use it and they can send Terrance out. Michael says none of this matters until the veto is played.

8:36 PM BBT – Taylor says one last thing though, and wonders if they try to build a relationship with Daniel before the veto… Michael says it wouldn’t hurt. Taylor says they should just in case.

8:50 PM BBT – Michael tells Kyle he doesn’t want Daniel to give up because he’s not totally sold on the idea that Daniel is who needs to go this week. Kyle says neither she.

9:25 PM BBT – Jasmine accuses Turner of eating the muffin. He laughs and denies the claim. He says he knows what she’s doing with this and suggests it’s her instead.

10:15 PM BBT – Jasmine continues to be upset about the muffins and vents to Indy. Jasmine worries that Alyssa is more loyal to Turner over the muffins.

10:35 PM BBT – Indy tells Jasmine she’d be willing to put her and Turner up if she were HOH. They try going through the votes to see how it’d turn out.

11:00 PM BBT – HGs had been upstairs playing Chinese checkers and the game wraps up.

11:20 PM BBT – Jasmine continues to complain about the muffins.

12:10 AM BBT – Turner and Joseph are camtalking and telling stories about back home.

12:35 AM BBT – Michael is having a bubble bath in the HOH room and camtalking about his favorite things in past seasons. He gives Janelle a shout-out for being iconic.

1:20 AM BBT – Taylor camtalks that she would not target the women if she wins HOH. She worries about Indy making Jury. She’d kinda like to see Daniel win Veto this week and be safe so she could save his eviction for herself another week.

Definitely a quiet night following nominations. The HGs could be resting up for the Veto comp ahead on Saturday and this one will help Michael set his plans and goals for the next eviction. We could end up with a LOT of HGs playing in the Veto depending on who gets picked. Daniel is still a big target for the week, but could end up getting a pass now that he’s isolated. Do you think it’s still the best plan to get him out or let him stick around?