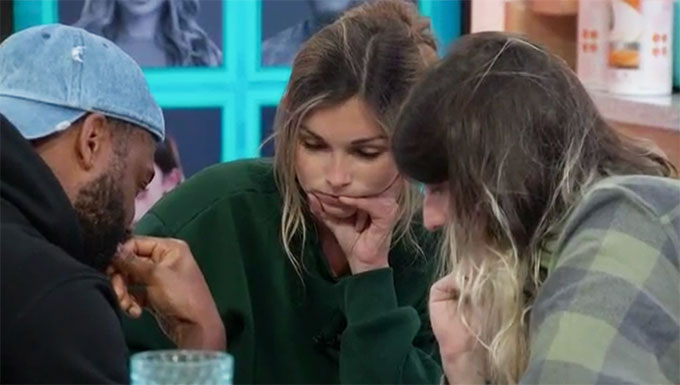 Brittany spent much of her Tuesday in the Big Brother 24 house feeling slighted by everyone staying up so late without her the night before, and started having doubts about trusting Taylor. So she went to Alyssa with her plan to keep her this week, hoping that Turner will also be voting to keep Alyssa. But Alyssa had a conversation with Turner that left him feeling more than ready to vote Alyssa out. It was a bit of a mess, so read on for all of the details.

11:15 AM BBT – Taylor tells Monte that no one can know (read more about that here!), then rolls over and falls back to sleep.

12:00 PM BBT – The houseguests are all still sound asleep.

1:30 PM BBT – Most of the houseguests are still sleeping. Brittany is laying in bed staring at the ceiling.

2:00 PM BBT – Alyssa heads upstairs to wake up Monte and Taylor. Alyssa asks where Turner is and Monte and Taylor pretend like he was supposed to be up there, but he isn’t.

2:04 PM BBT – Alyssa asks Turner to list a bunch of reasons why she sucks when he talks to Brittany later (to try and convince her to keep Alyssa).

2:12 PM BBT – Taylor tells Alyssa that her bed wasn’t made last night and didn’t want to make it while Alyssa and Brittany were sleeping.

3:00 PM BBT – General conversation going on in the kitchen between Taylor, Monte and Alyssa. Brittany is in the bathroom doing her makeup and Turner is still in bed.

3:15 PM BBT – Alyssa tells Brittany that if Turner wins HOH and puts up Taylor and Brittany, Monte will keep Taylor. Then says if Taylor wins HOH and puts up Monte and Turner, and one of them wins veto, Brittany will go home. Alyssa says if she stays this week, she will owe Brittany her game. She says if Turner wins HOH next week and she’s still there, she has a vote and she’d keep Brittany. Brittany says Turner will put them both up and Monte would vote her (Brittany) out.

3:19 PM BBT – Alyssa tells Brittany she has better odds with her than she does Taylor.

3:20 PM BBT – Brittany tells Alyssa that she thinks Turner made a deal with Monte this week so that’s why she doesn’t think her vote counts. Alyssa says if Turner is voting her out, she’ll be completely blindsided. She says she doesn’t think Turner would do that.

3:26 PM BBT – Brittany says Taylor is telling her she will protect her next week, but she doesn’t know if that’s true.

3:56 PM BBT – Alyssa tells Brittany she’s going to tell Turner if he betrays her they can’t be friends.

4:07 PM BBT – Brittany tells Alyssa that Brittany, Monte and Taylor have had a Final 3 since the house was split up.

4:08 PM BBT – Brittany has told Alyssa that Turner is planning to tell her the night before eviction that he’s voting her out. She says he told her not to say anything.

6:08 PM BBT – Brittany tells the cameras that she’s really mad and is ready to go home but isn’t giving up. Brittany says she has nothing to lose, so she’s not afraid to blow some stuff up.

6:10 PM BBT – Brittany says she literally trusts no one, not monte, not Taylor, no Turner, not Alyssa. She says she only trusts herself.

6:20 PM BBT – Brittany still talking to herself says she is sick of everyone. She’s upset they all stayed up until 8 AM. She says you are supposed to be awake between 10 AM and 10 PM and no one got up until 2 PM. She says she went to bed at 2 AM, so they were all hanging out for 6 hours without her, celebrating their Final 3. She says that pisses her off especially because Taylor has told her she has got her back but she doesn’t know if she believes her.

6:40 PM BBT – Alyssa says she isn’t sure Brittany would vote Taylor out unless she knows Turner will do it also.

6:45 PM BBT – Alyssa tells Turner she hopes they’re still friends after this. Turner says they will be. Alyssa says but everyone screws her over (she’s indicating they won’t be friends if he betrays her).

6:48 PM BBT – Turner tells Monte that he had an emotional conversation with Alyssa and she indicated that if he votes her out they can’t be friends outside of the house. Turner said that made him feel awful.

6:51 PM BBT – Turner says that he doesn’t believe it but Alyssa told him that Monte and Taylor have a Final 2 and that Monte would never take Turner to the end. Monte says they have never uttered those words.

6:52 PM BBT – Turner says he likes Alyssa, but he really doesn’t like that she expect him to keep her so they can remain friends. He says that just seems so extreme.

6:55 PM BBT – Turner tells Monte that Alyssa telling him that makes him actually want to vote her out.

6:57 PM BBT – Turner says he hopes Monte knows he wasn’t worried about him and Taylor having a Final 2, he just wanted to tell him Alyssa said that.

7:01 PM BBT – Turner tells Monte that Alyssa said if he votes her out, she won’t have his vote in the end either.

7:23 PM BBT – Alyssa tells Brittany that Turner told her he will not vote her out no matter what. Alyssa says she doesn’t see him betraying her.

7:28 PM BBT – Alyssa says to Brittany that if one of them win HOH next week, they put up Monte and Turner. Alyssa says she has no loyalty to them. Brittany says she’s in the same boat with Taylor. She says she will lose Taylor’s jury vote, but she doesn’t care.

7:39 PM BBT – Brittany tells Alyssa that unless anything crazy happens this week, she is voting to keep Alyssa. She says that no one can know, not even Turner. She says it has to be a complete blindside (so that Turner won’t change his vote to appease Monte).

7:50 PM BBT – Monte tells Taylor about how Turner was annoyed by Alyssa telling him if he betrays her they can’t be friends.

8:00 PM BBT – Alyssa is helping Brittany believe that Taylor flipped on her with Michael before he was out of the house. Brittany asks if Michael was on board with her going. Alyssa says she thinks he was.

8:40 PM BBT – Alyssa checks in with Monte and asks if there’s anything she can to do help him make her want to stay.

8:45 PM BBT – Taylor asks Turner if they’re all going to bed on regular time. Turner says he slept in until 4PM so it feels like the morning for him and he’s staying up.

10:00 PM BBT – Alyssa asks Taylor if she heard the wake-up music this morning. Taylor says it was “Sexual Healing” by Marvin Gaye. (BB with the jokes)

10:25 PM BBT – Chatter in the HOH room ends and Alyssa wanders off.

12:00 AM BBT – HOH crew is back up and downstairs in the kitchen making food.

12:15 AM BBT – Alyssa and Turner think Michael will be well prepared for the Jury Q&A.

3:10 AM BBT – Alyssa apologizes to Turner for threatening him earlier.

4:00 AM BBT – HGs (without Brittany) are downstairs playing cards in the kitchen.

6:00 AM BBT – Turner, talking with Taylor and Monte, tells them that Alyssa’s threat made him mad. He doesn’t like that she said he’d lose her Jury vote if he doesn’t give her a sympathy vote.

6:55 AM BBT – Monte and Taylor are alone in the HN room and in bed with the lights out. Kissing starts up and the Feeds switch to another room.

These HGs have started a rough cycle of staying up until morning and then sleeping in until the afternoon. If only there was some sort of production team to send their sleepyheads to bed before dawn.

As for the more interesting part, Alyssa doesn’t seem to have done herself any favors with telling Turner he’ll lose her friendship if he doesn’t vote to keep her. We’ll have to see if she tries again on Wednesday to sway him for a pity vote that Brittany could pair with her vote. Could get messy, but probably won’t work.