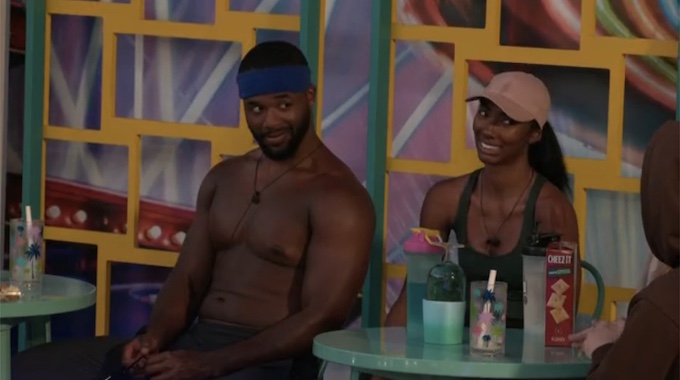 Sunday night most of the Big Brother 24 houseguests joined Monte in the Head of Household room for a group sleepover. Last night, only one Big Brother houseguest slept in the HOH room with Monte and that was Taylor. What happened next is something I don’t think anyone expected to happen with less than two weeks left of BB24. Read on to find out!

At about 7:43 AM BBT Tuesday morning, Turner, Monte, and Taylor all decided to call it a night and head to Bed. Taylor headed up to the HOH room and Monte followed soon after. When he got upstairs and got into bed, the two of them talked a bit about how the rest of the week should play out. They also talked about how they hope that Turner is doing okay because he has talked about missing home a lot recently.

After some game talk, Monte starts messing with Taylor and tells her that he is just trying to get her freaked out by mentioning that it looks like there is a screen in one of the mirrors. A couple of minutes later, Taylor tells Monte to let her know if she gets too close to him because she wouldn’t want to intrude on his space. He laughs and tells her that she can feel free to come “soak in this bear heat.” She asks him if he is offering and he says “yea, look, I’m toasty” and she touches his arm and confirms that he is warm.

Monte comments on how his body heat is perfect for cuddling and Taylor invites him to cuddle with her. Then, at 8:04 AM BBT on cams one and two, Monte and Taylor kissed and continued to do so for about two minutes until the feeds cut away from the Head of Household bedroom. It wasn’t until almost 10:30 AM BBT that the feeds returned to the HOH room to a sleeping Monte and Taylor.

Do you think this will change the trajectory of either of their games? Is it in their best interest to keep their sleepover to themselves?