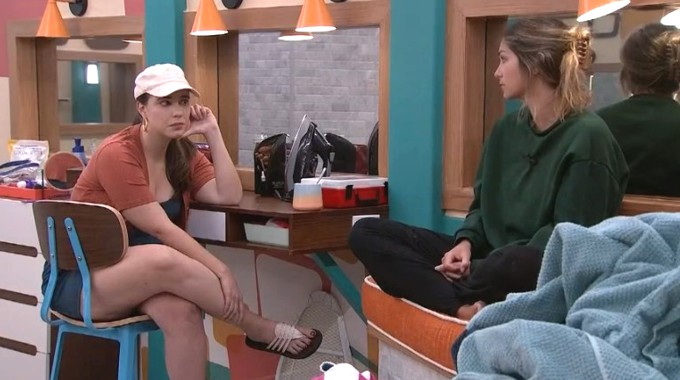 I’ll start this discussion off by saying I don’t think this plan is going to work and won’t get two feet off the ground, but nothing like a messy flop of a flip attempt to keep us entertained in the waning weeks of Big Brother 24, so here we go.

Tuesday on the Live Feeds, Alyssa and Brittany put their strategic minds together and started reviewing the landscape ahead for the final Houseguests. Flashback to 3:15 PM BBT 9/13 as Alyssa is making her pitch to Brittany that all roads lead to Brittany’s eviction. She’s pointing out Turner will protect Monte and Monte will protect Taylor forcing Brittany to win out to finale night.

Soon Brittany starts to spin this over in her head and shares with Alyssa that she formed a F3 with Monte and Taylor, but now she’s questioning if that could be trusted. Brittany also lets Alyssa know Turner is planning to vote her (A) out and is going to let her know the night before eviction. Alyssa’s strategy is to threaten Turner that if he votes her out then they can’t be friends outside the house…

Jump ahead a few hours to 6:10 PM BBT and you’ve got Brittany camtalking. She’s very frustrated to be excluded from the late-night festivities and thinks Monte, Taylor, and Turner have been celebrating their F3 alliance while she’s sleeping. Brittany is getting upset and questions if Taylor would really be watching out for her in these last rounds.

Alyssa goes to talk with Turner at 6:35 PM BBT and hatches her plan to secure Turner’s vote. It’s poorly executed. Alyssa is asking for reassurance that he’ll keep her and says if anyone betrays her they can’t be friends. Turner soon goes to talk with Monte and gives him a heads up that Alyssa is making him feel bad about that vote. Turner questions Monte if he has a F2 with Taylor but Monte assures him they have not made any such plans and Turner says he believes him. Turner shares that Alyssa also said he’d lose her Jury vote if she votes him out.

Brittany and Alyssa meet back up and Alyssa shares that Turner promised to vote to keep her. Brittany decides she will also vote to keep Alyssa but Alyssa can’t tell anyone or it’ll ruin the plan. So here Brittany is hoping to bypass the tiebreaker situation and piggyback on a possible pity vote from Turner to flip the vote and keep Alyssa over Taylor, 2-0. It’s just not going to happen.

Even this morning, little after 6AM BBT, Turner was telling Monte and Taylor that it made him mad to be threatened by Alyssa for his vote. He’s digging himself deep on this position. Even if he was fishing for them to go “ohh, it’s okay to give her a sympathy vote” I don’t think he could cleanly pivot. And really I don’t think he wants to either at this point.

Overall the idea isn’t bad on its own, but Alyssa went all in on the aggressive route with Turner instead of continuing her soft game which is better suited to her. To threaten Turner at this point made him turn and run in the other direction. Alyssa could have gone with a positive reinforcment, “toss me a vote and you’ll secure my Jury vote,” then had Brittany play it up hard that she was voting out Alyssa to make Turner think it was safe to throw a pity vote. Now that Turner has run this back to Monte and Taylor though, I don’t see him having a way to cleanly do this even if he wanted.

This is just messy for Brittany as well. She has to be fully convinced that Taylor had shut her out of future plans. In theory, Brittany could vote to keep Alyssa, Turner votes out Alyssa, and then Brittany acts all aghast that Turner would vote against Taylor… But Brittany isn’t that good of an actor and the other HGs won’t believe her. She’ll lose Taylor’s trust and that’ll be that.

The whole thing is poorly executed and that seems to be fitting for the game play we’ve seen from both Brittany and Alyssa so far this season. Ah well. I don’t want to see Alyssa stay over Taylor, but I do welcome chaos in the game and this would have done it. It ain’t gonna happen though!

Side notes: Taylor is playing a dangerous game right now with her last two nights of hooking up with Monte in the HOH room. She’s on the Block. If Turner finds out how escalated things have become for Monte + Taylor he may reconsider the options and could want to vote out Taylor. If he eliminates Taylor then he’s got Monte wanting to keep him versus having to play second fiddle to Taylor for Monte. Not sure why Taylor couldn’t hold off on the situation until she’s not in immediate risk, but that’s her call.

Then as for Brittany, someone suggested Brittany has nothing to lose but I disagree. She has Taylor to lose. Sure, as noted above Taylor could shift her priorities, but as soon as Taylor finds out Brittany tried to evict her then she’s definitely lost Taylor. Remember how petty Taylor wanted to be to Alyssa over the London trip? Taylor likes to make splashy moves for “good TV” and I think she’d do it here again. Risky move, Brittany.