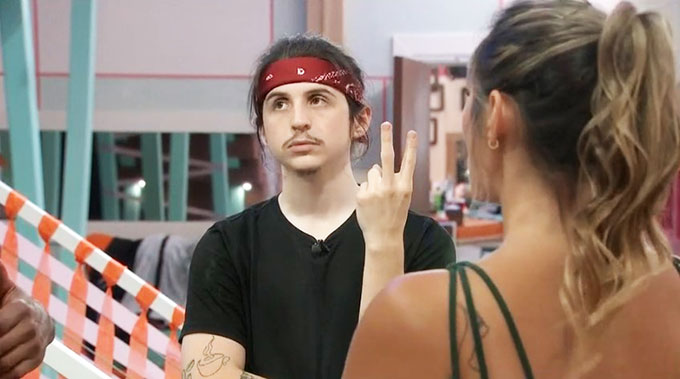 Taylor and Alyssa have once again found themselves on the block, but who will be leaving the Big Brother 24 house this week? There are only two votes this week, and as of now, we have a pretty solid understanding of what is going to happen. BUT this Final 5 is bored and restless, so things could change.

As you saw on Sunday night’s episode, Monte won HOH and nominated Alyssa and Brittany. What you haven’t seen yet, though, is Brittany won the Power of Veto and has used it on herself. So Monte, not willing to risk Turner going out this week, put Taylor on the block next to Alyssa. And Monte’s goal is for Alyssa to be sent off to jury.

Turner has mentioned to Monte that maybe it would be best for Alyssa to stay, but since then Alyssa has told Turner that if he votes her out they can’t be friends. And has upset him to the point he actually wants to vote her out now.

So then Brittany decided it might be better for her game if Alyssa stays, and came up with the plan to vote Taylor out, hoping that Turner will do the same. But now that Turner is upset with Alyssa, and has even filled Taylor in on that, I don’t think Brittany will be able to sneak this blindside in. At best it seems Brittany might split the vote, and then Monte will still break tie in Taylor’s favor.

Votes to evict Taylor: None

So Alyssa can finally join Kyle in the jury house. Unless anything changes from now until Thursday night. So who do you think will be evicted from the Big Brother 24 house this week? Let us know in our poll below.

Be sure to join us back here Wednesday night for our lates recap of BB24, and again on Thursday for our live coverage of the next eviction episode.