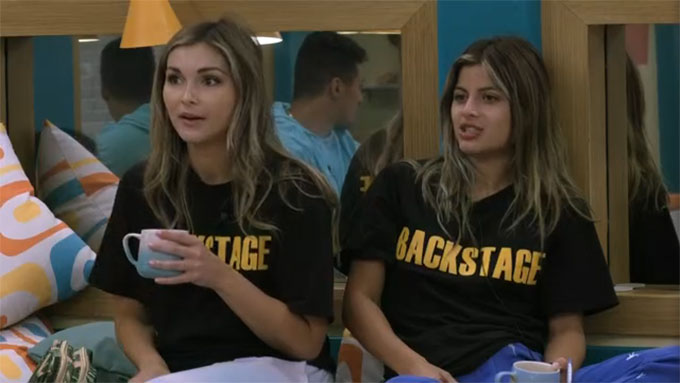 It’s not every season we get to see all the alliances and deals form on the Live Feeds, but since Big Brother 24 was another live move-in, we’ve gotten a bird’s eye view of all those. As we know in seasons past, often things that form on night one, and even week one, don’t always hold up, so who knows how these will all play out, but we have definitely seen enough of groups forming to do an early report.

As we’ve already covered, a woman’s alliance formed on night one, and has been going strong. Of course it doesn’t involve all the women, and in fact they are actually working on targeting one of the two not in the alliance, but that is beside the point at the moment. That alliance is made up of Paloma, Brittany, Alyssa, Jasmine, Amerrah and Indy. Taylor and Nicole were not included.

We’ve also got another large one forming, but it’s not completely official yet. That one consists of Paloma, Monte, Ameerah, Alyssa, Kyle and potentially Michael. At one point, it was going to be Pooch, but Paloma, who is playing a bit too hard too fast, decided to drop Pooch and draft Michael. But Michael did some cam talking today suggesting he isn’t interested in being the last addition to a large alliance because he knows he would be the first to go. But Michael might find himself in need of an alliance after nominations today.

And I think one of the most solid deals we’ve seen yet is that of Daniel and Nicole. They actually shook on the Final 2 deal and named the alliance the Rogue Rats.

We have seen some other talks here and there, but it’s hard to tell what ones are going to stick. One that I think won’t have a ton of time to really formulate is Kyle and Pooch, who have gravitated toward each other pretty organically like BB bros often do. They’re calling their thing Blue Eyed Bros. Alyssa and Paloma have dubbed themselves PSL and Brittany and Turner have an unnamed deal.

That’s a whole lot of deals and alliances for just under 48 hours and there are more being tossed around as I type this. So who knows what ones will actually stick. We will keep you updated as more develops.