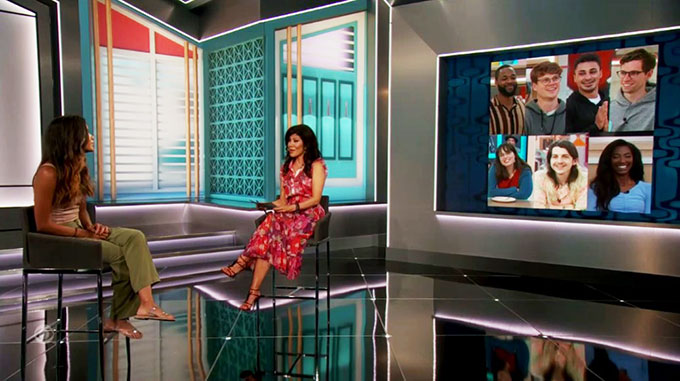 Big Brother 24 fans were treated to a good old-fashioned blindside this week, but the one person who isn’t reeling in that excitement today is Ameerah Jones.

But her bad week all started at the veto meeting when Tuner put her on the block instead of Taylor.

“I was extremely shocked. I did not see that coming from any angle,” she told Entertainment Weekly in her exit interview rounds. “It hurt my feelings, actually. I was completely shocked because I had talked to so many people in the house and I thought that the house was aligned on the next few people to actually go on the block.”

After that initial shock wore off, though, we saw Ameerah acting pretty confident on the Live Feeds. She was actually so confident she didn’t even campaign and talk many times to Terrance about how he was leaving this week. So why was she dressed to go meet Julie on Thursday night?

“So I thought that I was safe. I did,” she told EW. “But I knew in the back of my mind that there was potential, which is why I didn’t dress for the competition. I dressed to go and meet Julie because I wasn’t 100 percent sure. There were a lot of conversations happening that morning between people that I didn’t normally see together.”

Ameerah also discussed Taylor. Much like the others still in the house, she still acts a bit clueless as to why there has been an issue over Taylor’s treatment. But she does seem to be beginning to take some accountability.

“I didn’t like the treatment of Taylor,” Ameerah told Parade Magazine. “I have to admit that I contributed to it, especially in the beginning, because of how I felt and things I was hearing. I was hearing a lot of hearsay in the house. It’s just a bunch of secrets going around. We’re all here to play a game. People are throwing false accusations around plus true accusations, and you’re trying to figure everything out. And so once the house had a target of Taylor, we just kept rolling with it.”

And one last thing, who does Ameerah think can win Big Brother 24? She told Parade that Michael is her winner pick.