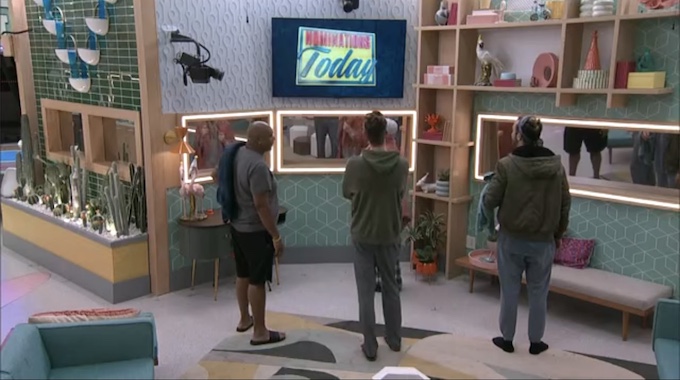 It is Nomination Day inside the Big Brother 24 house and this week’s Head of Household has conducted all their one-on-ones and has put a plan into place. Some people know the real plan, while others are being set up for another potential Big Brother blindside! Find out what this week’s plan is and what the HOH has told their fellow BB24 houseguests about the target for this week.

10:50 AM BBT – Michael tells Kyle that he thinks that Alyssa is the bigger threat. Kyle doesn’t think that Turner wants Alyssa to go.

10:55 AM BBT – Daniel tells Monte that he isn’t stressing about the change in votes yesterday. He says that Ameerah was a huge threat and her being gone isn’t bad for his game.

11:00 AM BBT – Monte tells Daniel that he isn’t sure what Turner’s motives were, but he thinks that Turner saw Ameerah as the foundational piece that sent Pooch home. They run through the options for noms.

11:15 AM BBT – Monte is asking Daniel for advice about his speech. Mentions wanting to tell Alyssa and Indy that he doesn’t intend for either of them to go home this week and wants them to fight for the Veto.

11:26 AM BBT – Monte tells Nicole that he had a conversation with Ameerah early on where they promised to have each other’s backs in the game. He tells Nicole that information ended up coming back to him from someone else, which made him feel uneasy about their relationship.

11:27 AM BBT – Daniel tells Kyle about his conversation with Monte including that there might be a plan where they go up on the block. Kyle pretends to be shocked and upset about this news.

11:35 AM BBT – Monte ran the option of Indy & Alyssa being put up and asked Nicole what her opinion is on who should go if they are still on the block on Thursday. She says that Alyssa has loose lips and she doesn’t fully trust her, but Indy has voiced that she doesn’t trust Nicole because of her relationships with Daniel and Terrance.

11:37 AM BBT – Monte tells Nicole that he is going to talk to Alyssa and Indy about going up but make sure they know neither of them are his target. He says that his main target this week is Taylor (it’s really Nicole).

11:40 AM BBT – Monte tells Alyssa that she has a pretty good idea of who his main target is this week and mentions that backdooring her is the best route. That way Nicole doesn’t have to throw a comp and they don’t have a shot at winning. Alyssa is worried that they won’t be able to win the Veto and it won’t be used on them.

11:43 AM BBT – Monte reassures Alyssa that if the Veto isn’t used and they are still on the block on Thursday that they would have the votes to keep Alyssa safe.

11:50 AM BBT – Monte tells Indy that he doesn’t like that this week is so complicated. He says that he doesn’t have a clear idea of what everyone wants but he thinks that Taylor is his target because he has heard from several people that she is going to target him. Monte brings up wanting to put pawns up and breaks down the options.

11:53 AM BBT – Nicole is talking to Taylor about what happened the day before. Taylor tells her that cover story.

11:55 AM BBT – Nicole tells Taylor that she was planning on voting with the house, but because she wasn’t filled in on the switch, she ended up on the wrong side of the vote. She says that while she’s upset that Ameerah is gone, she’s happy that Terrance is here.

11:57 AM BBT – Monte tells Indy his plan and Indy is clearly nervous about it. She tells him that if she was in power, she wouldn’t put him in this position. He asks if there is anyone that she thinks won’t use the Veto and she says after yesterday, she has no idea. She’s upset that no one told her about the vote flip and that she couldn’t say bye to Ameerah the proper way.

12:05 PM BBT – Monte tells Kyle that he told Alyssa and Indy that they would likely be going up. He tells Kyle that Alyssa took it pretty good, but Indy is trying to play the emotional card.

12:10 PM BBT – Kyle says that they have to think about the comp threats like Nicole and Daniel, but also the social threats like Alyssa. Says that Alyssa could influence Taylor, Brittany, or Michael to jump ship and join the other side. Monte thinks that Nicole is a bigger threat than they think.

12:13 PM BBT – Kyle tells Monte that he has been 100% honest with him and Michael throughout this game and he has never had any information that he shared come back to him. Monte says that they can keep an eye on Alyssa and if it seems like she is the ring leader, they can always shift the target to her.

12:25 PM BBT – Brittany and Michael wonder to Monte if they should plant a seed with Indy or Alyssa about possibly joining them if one of them is evicted on Thursday. They all agree that it might be easier to plant that seed with Indy.

12:30 PM BBT – When Nicole leaves the back room, Alyssa, Indy, and Jasmine talk about how Nicole is always lying to them about being okay with throwing the competition. Alyssa points out how last week Nicole had a meltdown over it. Jasmine says she doesn’t trust Nicole at all.

12:35 PM BBT – Monte breaks down the pairs and who could go up. He gives his reasons for or against putting each up.

12:45 PM BBT – Monte tells Taylor and Nicole that if noms were to stay the same, he is indifferent on either of them (I&A) going home.

12:50 PM BBT – Taylor makes an excuse to talk to Monte alone and Nicole leaves. Taylor asks him if he has an actual target this week. He says that Nicole is an issue for sure, but Alyssa is an issue in other ways. He also reiterates that he wants to respect Taylor and if she doesn’t want to be on the block, then he’s fine with having a conversation.

12:53 PM BBT – Taylor tells Monte that this alliance has given her security on a silver plater, but her, Michael, and Brittany are the only ones who have felt risk in this house. She then asks if Nicole offered to be a pawn and he tells her that Nicole did offer that and to throw the Veto Competition.

12:55 PM BBT – Monte tells Taylor that her trust in this game means more to him than getting the right target out this week (Nicole). Taylor tells him that truthfully, when she sees Nicole and Daniel walking around patrolling the house, she has a physcial reaction to it. She adds that she doesn’t feel comfortable living here with them. She says that for her own comfort in this house, she does want Nicole to go. She knows that she will have to be strong one more time, but after this…He says that she won’t be a pawn for them anymore.

1:00 PM BBT – Monte says to Taylor that if she does go up and Nicole goes home, she gets to pick her Festie Bestie. Without hesitation, Taylor says Indy and Alyssa.

1:03 PM BBT – Monte lets Taylor know that he has been telling people that she is his target, but she knows that it isn’t the case. He says that he will also be saying that Indy and Alyssa aren’t his target in his speech.

1:05 PM BBT – Monte tells Terrance the plan to use Alyssa and Indy as pawns with the backdoor option of Taylor and Nicole. He says that there have been some rumblings in the house of people not trusting Nicole. Terrance says that he wants to talk to him more about that, in detail. Terrance tells him that he doesn’t feel right with her.

1:23 PM BBT – Brittany tells Michael that she doesn’t think that Jasmine knows Alyssa was in Po’s Pack. Michael says he might be honesly with Jasmine before it’s leaked by someone else.

1:35 PM BBT – Joseph tells Indy that Monte trusts her so he doesn’t want her to think that him putting her up means he wants her out. She says she knows, she would just never put him in that position.

1:50 PM BBT – Kyle tells Alyssa that the plan is to put them (A&I) up, but he thinks they can flip the narrative and point fingers at Nicole since Monte already thinks that she’s the one who told Daniel about Po’s Pack.

2:00 PM BBT – Daniel tells Nicole that he thinks that Alyssa is mad at him because she snapped at him when he went into the room. Nicole says that Alyssa isn’t mad and felt bad for that, but Daniel doesn’t believe that because she hasn’t said anything to him.

2:02 PM BBT – Nicole tells Daniel that they are all trying to find out if she is the leak (Po’s Pack). She adds that Monte and Taylor are terrible liars too and mentions how Taylor asked him to talk after they both talked to him. Daniel mentions that the best case is that he puts Indy and Alyssa up, Taylor and Nicole get picked for Veto and win it.

2:35 PM BBT – Monte has gone through all the scenarios with Jasmine for this week and implies that Alyssa and Indy are going up. Jasmine tells Monte that she heard from some people that Alyssa is spreading her personal stuff around (she only told Alyssa and Ameerah).

2:42 PM BBT – Monte tells Jasmine that his goal this week is to BD Taylor. However, if for some reason, Indy and Alyssa are on the block on Thursday, he’s feeling pretty indifferent about who goes.

2:45 PM BBT – Nicole and Indy are strategizing for next week already. Nicole tells her that her and Alyssa need to win HOH so they can put Monte, Terrance, and Joseph up so they all can fight for the Veto. Indy doesn’t like that idea though.

2:57 PM BBT – Monte confirms with Jasmine that Indy and Alyssa will be on the block.

Looks like Nicole and Daniel might be putting some things together which could be bad news for The Leftovers alliance. Now that Nicole senses something is up between Taylor and Monte, Nicole’s ideal situation is for her and Taylor to get picked and win the Veto. That way the backdoor plan can’t go through, however, this could cause Nicole to make a pretty difficult decision. Use the veto on Indy and Alyssa which will risk Daniel’s game, or keep them on the block and completely lose their trust.