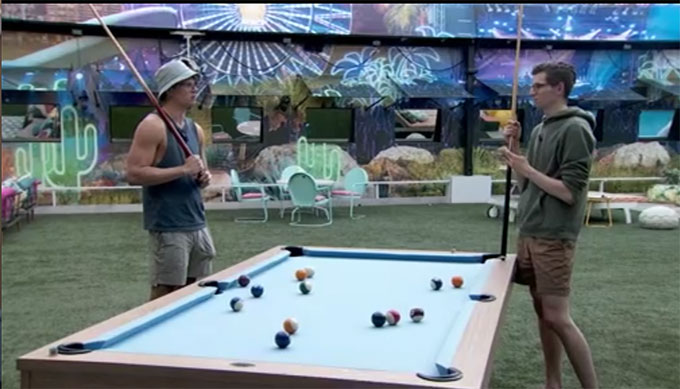 Normally in this space on a Monday, we’d be updating you on any new Big Brother 24 alliances and deals, but since the house has been divided for several weeks now, we haven’t seen any major changes or shifts in this area.

But in recent days, The Leftovers are showing some major cracks. And it’s Kyle who is the one chipping away at those cracks. Kyle, who over and over has claimed to single-handedly create The Leftovers, has been trying to break it up. Or at least setting the stage to break it up. And it all started when his showmance with Alyssa kicked into high gear.

Kyle’s concerned that the “loud” voices in the alliance (Monte, Taylor, Joseph) are going to strong-arm himself, Brittany and Michael. I’m not sure where Turner stands in all this from Kyle’s point of view, but I guess he would be a part of what Kyle has called “the silent majority.” Kyle had previously mentioned something very similar the other week when he brought the idea of splitting up the alliance based on his fear of a “Cookout 2.o” forming. And now he’s back at it after learning that The Leftovers wanted him to use the veto this week so they could send Alyssa to jury. So Kyle is now suggesting to Brittany and Michael they stick together, and can keep Alyssa this week to help them go after members of their alliance since they can’t do that. Fans say that wasn’t a good look the first time he mentioned it, and say it’s certainly not a good look now.

And now it looks like Kyle has gained some headway with Michael and Brittany. They went from wanting Alyssa out along with Taylor, to telling Kyle they won’t fault him for wanting to keep nominations the same. And they’ve taken it even further by no longer wanting to honor their Final 3 with Taylor. Something flipped like a light switch with them. It’s hard to pinpoint exactly what it was, but Kyle seems to have even convinced Michael that maybe Taylor would put Michael on the block instead of Alyssa if Kyle uses the veto. Seems like the Big Brother paranoia has really kicked in.

As of now, The Leftovers are still in tact, but there seems to be a divide among them coming. Kyle has really shown that he’s not that much of a team player to Taylor, Joseph and Monte, but Michael and Brittany seem all in with Kyle. Turner is the one we aren’t sure about. He is definitely still wanting to ride with The Leftovers until the Final 7, but has started talking about who should go first when they get there.

It does need to be mentioned that this cast has talked about a lot of good and bad ideas, but few have actually taken flight. They sway like the wind. Michael was ready to strike at Monte last week and that didn’t happen. So who knows if this is all Big Brother talk and paranoia, or if something will actually happen before the alliance gets to the final 7. Next week’s split house/double eviction twist will definitely be the moment of truth for them. If they can make it out of that twist in tact, then it’ll be almost time for them to start turning on each other anyway.