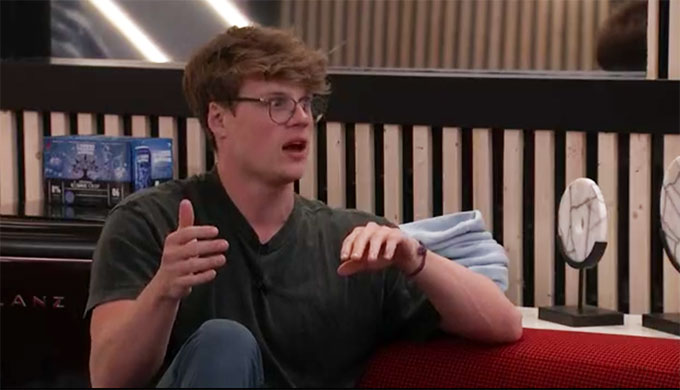 Big Brother fans have been excited about the seemingly unbreakable alliance, but Kyle let new Head of Household Michael know last night that it wasn’t really ever that unbreakable, and was actually just formed out of necessity.

Around 3:35 AM BBT, Kyle goes to Michael to run scenarios and express his concerns over the house dynamics. He thinks if Daniel goes this week, then it might be time to rethink The Leftovers alliance.

He worries that Monte, Joseph and Taylor might see Terrance, Indy and Jasmine as three easy people to pull in and work with them. “They share very common purposes for being in this game,” he says.

He the explained his thinking further.

“Those six with that background … I mean it looks very similar to The Cookout, Kyle says. “With a very diverse background. They’ve all expressed why they’re in this game. Like Joseph … more Middle Eastern representation in TV. Indy … there’s never been a Brazilian contestant or winner. Everyone has those strong why’s that all coincide.

“Where I look at our alliance… it was great because it was based out of necessity and our backs were against the wall, and that’s what brought us together. Take away that necessity or the fear of like risk of a bigger alliance out there … I don’t know. That’s my biggest fear right now.”

So to translate, Kyle is worried that the minorities in the house will team up and take out all the white people.

Kyle suggests the way to avoid that is to send home one of the other three (Indy, Jasmine or Terrance) and keep Daniel. He then adds that Daniel could be a number for them (Kyle, Michael, Brittany and Tuner – all the white and American-born houseguests).

Michael gave him a lot of nods and “yeahs,” but didn’t really share Kyle’s sentiment during that conversation. He then questioned Kyle on why he thinks Taylor would be so close to the others to ditch the Leftovers because that’s not something he’s seen. Kyle says Taylor is close to Terrance and she sees her getting closer to Joseph.

Michael lets Kyle knows that he needs him in this game and hears his concerns, but it doesn’t seem like Michael is on the same page.

Kyle pushes it further and says if they don’t form that new alliance this week, they might form it next week.

So that was disappointing. I mean The Leftovers haven’t broken up yet, but the way Kyle sees things is really off-putting and leaves a bad taste in my mouth.

What do you think of Kyle’s thoughts? Is he just trying to stay off the block or is he ready to break up The Leftovers? Or has that showmance effected his reasoning already?