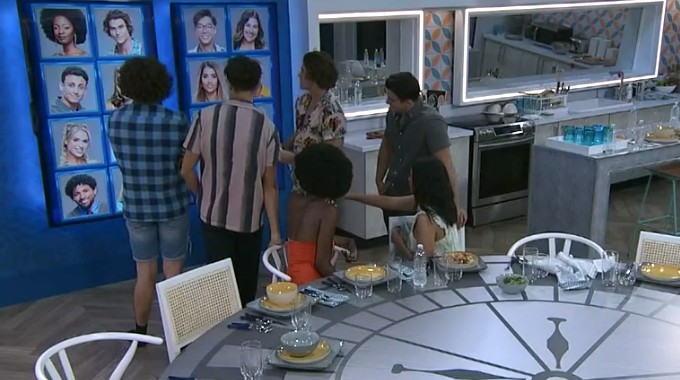 Welcome to the Big Brother Live Feeds for BB23 as the new season is underway after Wednesday’s premiere episode and now we’ve got the Feeds to boot. Pretty great to get these early Feeds having just missed a few hours instead of days. Now we’ll get to watch in on the HGs as they start to align, plot, and plan for the first eviction of Big Brother 23. Read on to check out what happened the first night.

9:45 PM BBT – Alyssa is laid out on the lounger in the bathroom. She’s keeping the trash can nearby and has been vomiting (off-camera).

9:55 PM BBT – Frenchie connecting with Tiffany. He discusses realizing he’s “the old guy” for the season (she’s older than he is).

10:15 PM BBT – Frenchie talks with Claire and Derek in generalities about which kind of HGs can be trusted.

10:25 PM BBT – Frenchie tells Tiffany he is not going to target any of the women and they discuss going after the Jocks. He promises to be the “showmance killer.”

10:45 PM BBT – Alyssa and Frenchie having a good talk. She admits to knowing the show and having auditioned four times.

11:00 PM BBT – Whitney tells Tiffany she would have nominated two weak players if she got HOH, but then might have backdoored a stronger player. Tiffany suggests the two of them work with Frenchie. Whitney agrees. They grab Frenchie and start to talk but get interrupted. Whitney wants to bring Britini into their group.

12:45 AM BBT – Travis and Derek X are reviewing their options for allies. Travis worries about Britini’s intensity. He’s also noticed Brent and Christian are getting close. Travis hopes they can work with Claire and Hannah.

1:05 AM BBT – Christian and Alyssa are trying to make Slop.

2:15 AM BBT – Frenchie is working on a backdoor plan and will not be nominating any of the women.

3:20 AM BBT – Britini talks to Christian about creating an eight-person alliance. Christian says that’s too many and suggests five instead.

3:40 AM BBT – Frenchie reiterates his plans to target showmances. He’s talking with Claire, Azah, Britini, and Hannah. He wants to go after the guys and asks that in return the women don’t target him next week.

4:50 AM BBT – Lights are going off in the house as HGs are finally settling down for what’s left of the night.

Solid start to the new season. Frenchie looks ready to target the Bros/Jocks and will be working closely with the women to make that happen this week. We’ve likely got noms coming up either today or tomorrow and then this “Wild Card” competition probably on Friday so they can make it part of Sunday’s show. Busy stuff ahead so stick with us for the latest!