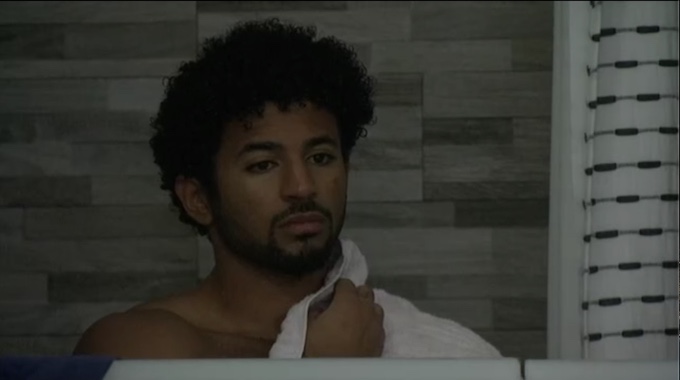 It was a day of studying for the Big Brother 23 Final 4 as they all went over the days and events for the season in preparation for the final Power of Veto comp of the season. They have been speculating that the Power of Veto would take place at some point on Friday inside the Big Brother house and they wanted to make sure they were ready.

8:30 AM BBT – Xavier is up studying, everyone else is sleeping.

11:25 AM BBT – Derek and Azah are talking about a talk he had with Xavier and how it made him realize that he can’t take Kyland to F3 over Azah.

11:40 AM BBT – Azah is telling Derek about how she told Kyland before the first eviction that she was going to vote out Tiffany. He told her that if she wanted to tell Tiffany that it’s all his idea, she can. Azah decided to tell Tiffany the truth that this was her decision and it was game related. Tiffany told Kyland this and Kyland was upset and that’s why he used the Veto on Xavier during her HOH.

11:41 AM BBT – Xavier comes in to tell Azah and Derek that breakfast is done and Derek tells Xavier that he told Azah that he was going to stick to the F3 that they (Azah, Derek, and Xavier) have.

11:46 AM BBT – Xavier tells Kyland that Azah probably feels like she is on an island now that she knows that Derek has F2 deals with Xavier and Kyland.

11:48 AM BBT – Derek tells Xavier that he had to tell Azah (about sticking to their F3 with her). Derek tells him that he needs to have a clear conscious before the Veto. Xavier is concerned about what’s going to happen if Kyland wins and Azah tells Kyland that Derek was going to cut him?

11:51 AM BBT – Xavier tells Derek that Kyland will think that Derek is just trying to play it up to Azah. Xavier tells him that he (D) has to stop talking so much game.

12:00 PM BBT – Not much going on inside the house right now. Azah and Xavier are in the kitchen and Derek is sleeping.

1:30 PM BBT – Xavier is in the HOH studying alone while Kyland is in the HN room re-reading his HOH letter and looking at his pictures.

2:25 PM BBT – Xavier and Derek are trying to remember how to play Spades (they got a deck of cards from somewhere). They also talk about Rummy and other card game options.

2:53 PM BBT – Derek goes up to the HN room to try and talk to Kyland and clear the air with him. Derek talks about how everyone’s games are in each other’s hands at this point and he was just trying to be honest with Azah.

Could Azah find herself in the F3 on Big Brother? It all comes down to who wins the final Power of Veto for Big Brother 23. The houseguests are expecting the Veto to happen at some point today, but we don’t know if that’s been confirmed or if they are just expecting it because everything happened a day early this week. Either way, we will have spoilers for you as soon as it happens.