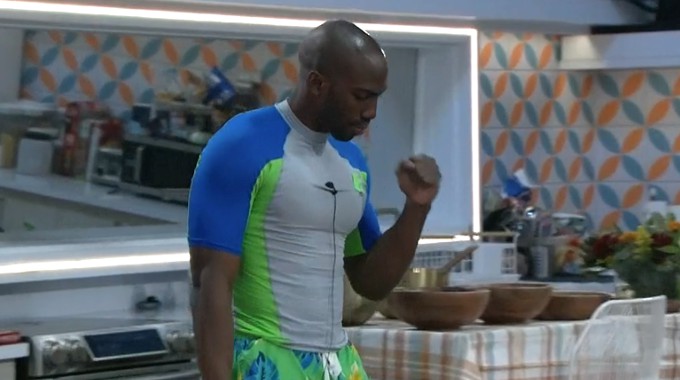 Thursday was a big day for the remaining Big Brother 23 Houseguests as the F4 became the F3 in a contentious eviction vote that soon lead to the first of the final HOH competitions. With just three HGs left in the race the end is closing in with one of them taking home the big prize. Read on to see what happened overnight and where it could take us next on Big Brother.

9:20 AM BBT – Kyland is moving all of his stuff out of the Have-Not Room and bringing it down to the Coral Room. He makes small talk with Azah and Derek on his way through the house.

9:35 AM BBT – Kyland is packing all his belongings in the Coral Room while Derek is doing dishes in the kitchen.

10:10 AM BBT – Derek wonders why they are closing the HN room. Xavier says that there probably won’t be anymore HNs so they might want to clean that room up. He adds that they haven’t had HNs since they hit F6.

10 38 AM BBT – Xavier tells Derek that they still haven’t come up with a name for their F2.

10:53 AM BBT – Xavier and Derek are playing cards while eating breakfast.

10:59 AM BBT – While Derek and Xavier are trying to pick a name for their F2, the feeds cut to Pet Loops for nearly twelve hours.

10:56 PM BBT – Feeds return as the F3 have just completed Round 1 of the Final HOH. Congratulations to Xavier on R1.

10:57 PM BBT – Azah is showering while DF chats with her. Xavier is pacing in the bedroom. He’s still agitated about Kyland’s “role model” challenge during his eviction. Xavier says to himself that he’ll be a role model to his nephew by winning. X adds a bonus whisper, “kiss my ass, Kyland.”

11:00 PM BBT – DF is called to DR. Azah is wrapping up her shower. Xavier is still pacing around the house and is cold, waiting to either have a DR session or get out of his comp clothes.

11:30 PM BBT – Xavier and Azah discuss that Kyland wanted the F3 without Azah. Xavier says he’s happy they blindsided Kyland or else he would have been all over DR all day, every day. X says Kyland instead wanted to be cheap with a cheap comment.

11:35 PM BBT – Azah points out that after Kyland targeted Tiffany he (K) shouldn’t have been surprised for anyone else to do the same to him.

11:55 PM BBT – Derek says he’s happy with his decision to evict Kyland and says it was the right one.

12:00 AM BBT – Derek wishes he could see the Jury’s face when Kyland walks in. Xavier tells DF they’re just one comp win from securing F2 for themselves. Derek is excited after “all this work” to reach the end.

12:10 AM BBT – 3 HGs continue to discuss Kyalnd and how he felt he was manipulating everyone but was actually doing a poor job of trying to hide it.

12:20 AM BBT – Azah again challenges Kyland’s hypocrisy to say he deserved to be there because of his hard work but he also target Tiffany at F6 despite all her hard work.

12:25 AM BBT – DF says the original plan was to get Ky and Tiffany both out first in the F6. He didn’t think they’d let them stay as long as Ky did.

12:45 AM BBT – Xavier and Azah think Kyland reacted the way he did because he was embarrassed. X says he was playing to take out Kyland the same way Ky took out Tiffany.

1:00 AM BBT – HGs discuss that Friday will be a day of rest with Round 2 coming on Saturday.

1:15 AM BBT – F3 rehashing how Kyland wouldn’t leave after he was evicted. They discuss his bad attitude and how he’ll need to get over it.

The Final 3 is here and they’re already done with the first of the three final HOH competitions. Xavier took Round 1 which leaves Derek and Azah to battle it out in Round 2, which sounds like that’ll happen on Saturday. In the meantime we’ll be watching for an early arrival and anymore updates along the way.