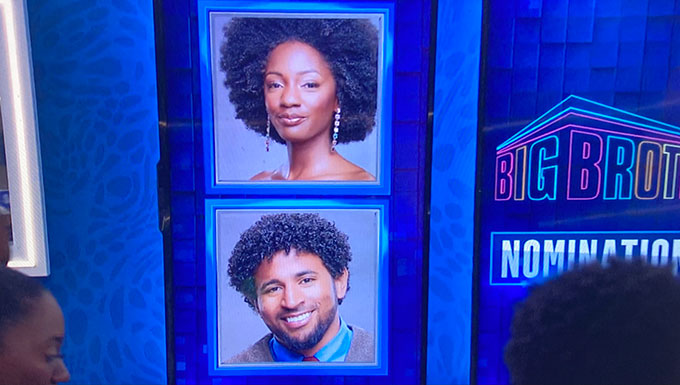 Tonight on Big Brother 23 the Final Four are faced with the final veto ceremony of the season, and the last official eviction before the season finale.

As of now, Xavier is the only one securely in that Final 3 spot. And with Derek F currently holding the sole vote to evict power, we can almost say he’s got his spot in the Final 3. But if Xavier thinks Derek can’t do what needs to be done tonight, he could still end up on the block this week. And while we don’t expect him to get voted out regardless, you can never say never when you’re not HOH at this point in the game.

So if things stay the same tonight, and Xavier does not use the Power of Veto on Azah, then we will know Derek is safe. But is he really going to take that shot at Kyland as Xavier wants him to do? As of last night, Derek was more than ready to make the move. Kyland has Derek pretty upset this week, as he feels like Kyland has been more arrogant to him that usual, and feels like Kyland is acting like he doesn’t even need Derek this week, when he actually really does.

Xavier has been playing it up to keep influencing Derek to make the move, and it is working. Last night Xavier told Derek that Kyland has probably not been that nice to Derek this week because he probably thinks Xavier will use the veto on Kyland (like Kyland did on X during that second Double Eviction), so Kyland isn’t even considering Derek a factor this week. That has just fueled Derek more.

And then Kyland called Derek cocky. And that was like the final nail in the coffin. Because Derek promises he’s not cocky. And then goes on to have nice long conversation with us (or was that just with himself?) last night, and reminded us that HE has been the puppet master this season. He has called all the shots. He has gotten out “12 of these bitches.” Nah, not cocky at all.

So now Derek wants to show Kyland just how cocky he can be when he votes him out tonight.

I think any doubts Xavier (and we) had about Derek making the move of voting out Kyland tonight have been erased. Derek has spiraled the past couple of days, and realizes now that he probably has to make this move or he might not end up in one of those Final 2 seats. There’s still a possibility he could waver at the last minute, and if Xavier gets any hint of that, Azah comes down, Derek goes up, and Azah sends Kyland to jury.

So unless Derek is pulling a fast one over on Xavier, which I really don’t think is possible, then Kyland is leaving tonight. Whether it be at the hands of Derek or Azah, Kyland will be finishing in fourth place. That is our official prediction.

And it looks like you agree. In our Big Brother 23 Week 11 Eviction poll, more than 80 percent of the vote went to Kyland getting evicted. Do you agree with the prediction? Will Kyland be voted out tonight?