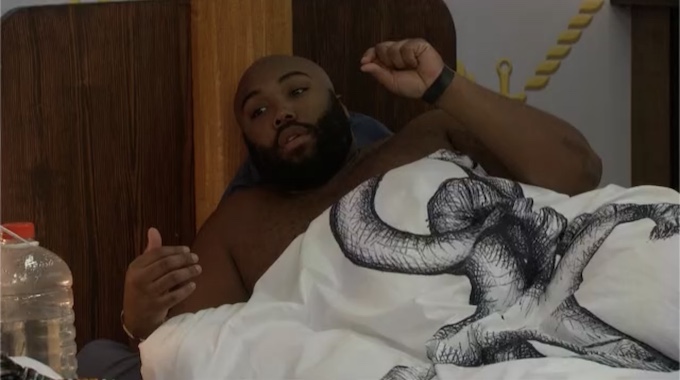 It was an interesting day inside the Big Brother 23 house between Derek camtalking about how amazing of a game he has played and then reiterated it in a conversation with Azah late last night. Read on to find out how Derek sees his gameplay and who he thinks he has a chance of beating in F2 on Big Brother 2021.

Just when we thought that Derek couldn’t be more delusional, he goes and compares his gameplay to Xavier’s. Yes, you read that right. He thinks that he has played the same game as Xavier.

During a conversation with Azah (11:35 PM BBT on cameras 3 and 4), he elaborated on why he thinks he is the mastermind of the season. He talks about how he told all his targets that no one in the house was safe and how he was able to get every one of his targets out of the house. Derek asked Azah if she plans to bring Xavier to F2 with her if she wins the Final HOH. He tells her that if she is sitting next to Xavier, she will lose to him. Derek says that she would have a better shot at winning against him (Derek) but then says that if he is sitting next to Xavier, that he could win.

He tells Azah that he and Xavier have played the same game and she asks if they played the same game then how does Azah lose against Xavier but not against Derek? Derek says that she played an honest game, but Derek didn’t and she has relationships with the jury members. Derek says that when it comes to Xavier, he has more comp wins and kept himself safe when he had to, but all Azah has is one HOH win.

She wonders how he has a chance at beating Xavier in F2 and Derek says that they both were on the block, Derek started the Cookout but Xavier came up with the name. They both manipulated others to make sure that moves happened to get them to the end. He says that even though Xavier won comps, Derek won in a social aspect because he made sure that things got done and he was able to get someone to take him off the block.

We ended this contradictory conversation with Derek telling Azah how he masterminded this Final 4 by convincing Kyland to use the Veto on Xavier during Azah’s HOH. He says that he made Kyland think that Azah and Xavier weren’t close so that he would be open to the F4 with the two of them. However, Azah doesn’t seem to be buying any of what Derek is trying to sell her and the chances of the Jury buying any of it is pretty slim also.

What do you think about Derek’s thought process?