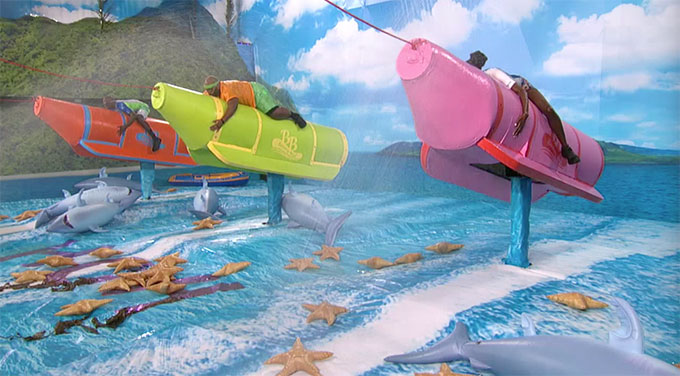 Xavier, Azah and Derek F started their final battle to the Big Brother 23 Finale on Sunday night as they laid out their games for us and played Part 1 of the Final Head of Household Competition.

Based on that Final 3, the outcome of that competition should come as a shock to no one. But we’ve still got a recap to write, so let’s keep some suspense building.

In what appears to be a live episode (spoiler: it’s not), Julie Chen welcomes us back to another episode of Big Brother. She lets us know right away, that we are basically in for another clip show, but at least this time we get to hear the Final 3 lay out their entire game for us. Oh, now I can’t wait for Derek F to explain how he masterminded the whole season.

Xavier explains that his game this season consisted of him laying low, throwing some comps and became the glue to hold the Cookout together. I will give him that last bit for sure. Any time Tiffany, Kyland, Azah or Derek F were going at each other, he was there to keep them from blowing up their alliances.

And of course we can’t have a Xavier section without him mentioning Alyssa and telling us how hard it was to lose her. We get it, we get it. Give it a rest.

Azah is up next. Julie tells us that loyalty was definitely her biggest strong suit. And I will agree with that.

Azah herself lets us know that she thought she was going to come into the game as a comp beast. But since she wasn’t turning out to be a comp beast, she said she had to play an under-the-radar game. She says her strategy involved keeping a low profile and building genuine relationships.

What I liked most about Azah’s game was this next part. She says that part of her game was just being honest with people. And honest she was. She told people what she was feeling, when she felt it. And the only time she really lied was when she absolutely had to during that double eviction.

She says she played the most authentic, loyal and honest game. I don’t disagree with that. Was that enough to win this game though? She thinks so. She says she feels like she’s going to win. She says she can’t explain why, but she just feels it.

And now we move on to Derek F … and Julie sums it up nicely: “He hasn’t won a single competition yet, but as he will tell you that doesn’t mean he hasn’t dominated the game.”

Derek F really thinks he made some big moves this season. He played a great game in his head.

Sometimes his delusions are funny, but other times they border on frustrating. Like when he says his social game is one of the best in BB history. That is not even close to being true. Another thing not true is him saying he formed the Cookout. He might have been the first to mention the name, but he didn’t form it or keep it together as he said.

He really thinks he got all six of them to the end. I’m sorry to be editorializing so much here, but I can’t recap this without calling out these lies and decisions. I know a lot of people don’t watch the Live Feeds, and rely only on the episodes and recaps, so I feel it is my duty to explain this. 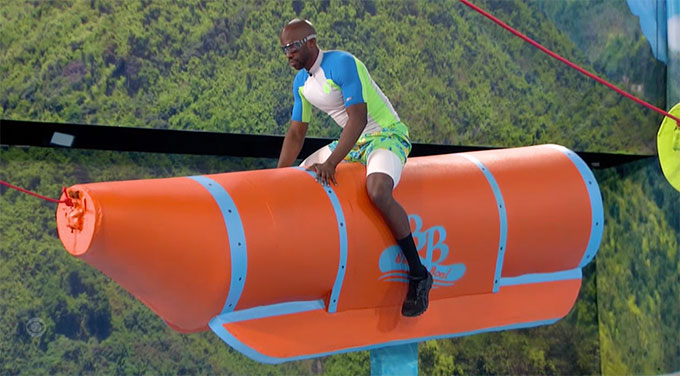 Anyway, enough of this slip show, let’s get to Part 1 of the Final Head of Household competition.

The winner of this one will advance to part 3 on finale night. The goal of this competition is simple, just hold on to their bouncing and swinging boat the longest.

Derek is out first. After 19 minutes.

Azah is out after Derek, after 26 minutes. Xaiver has won Part 1.

Azah and Derek F will face off in Round 2 which will air on Wednesday night, but we already have the Round 2 spoilers if you want to know who won. Who do you think will win part 3 and then go on to win Big Brother 23?