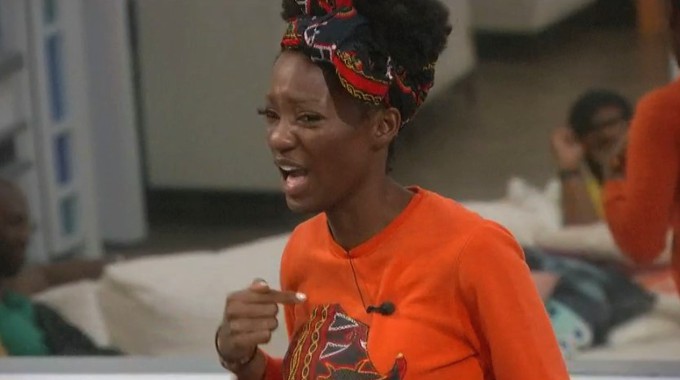 The bell will soon be tolling for Kyland’s game on Big Brother 23 and the rest of the final four Houseguests have been debating just how to handle the situation. Well, actually it’s just Derek who can’t seem to commit to what needs to be done to move their game ahead. But if he won’t do it, Azah will!

Yesterday on the Feeds for the second time in recent days, while Kyland was safely tucked away in the DR we listened in on Xavier, Derek, and Azah discussing the need to send Kyland out the door. Flashback to 10:20 PM BBT 9/21 on all cams (Live Feeds Free Trial) for the discussion.

Xavier declares he does not want to blindside Kyland with his eviction, but he also doesn’t want to give Kyland too much time to be in their ears about it for the next few days. He suggests they might even wait and tell him during the live show.

Derek says that Kyland could be a vote for him and this may mess it up for him. Azah sits up and starts joking “I’ll do it! I’ll do it! I’m foaming at the mouth! I’ll do it!” Azah is ready, Coach, put her in the game and she’ll vote Kyland out!

Derek then goes on to say he worries he’s going to break Derek’s heart by voting him out. He thinks this will kill Kyland. “I’ll kill him,” offers Azah. Xavier quickly interjects that she doesn’t mean that literally, just his game. “In the game, in the game,” says Azah.

Derek continues to lament that Kyland will be “devastated” by this betrayal. Azah teasingly agrees. Yeah, they’re both right. Kyland is going to be crushed by this move, but whose fault is this but his own?

Just because Kyland made a foolish mistake by keeping Xavier in the game doesn’t mean that Xavier has to do the same. It was a bad move, Kyland. He knows the risk too as we’ve heard Kyland on the Feeds realizing that Tiffany and Hannah were right when they warned him about keeping Xavier. Even if Kyland made it to F2 with Xavier, like he dreamed of happening, it’d be a wreck for his game and he’d lose there too as his vote analysis recently revealed to him. Of course, second place money is better than fourth!

What do you think will happen? Will Xavier decide to stick with DF to cast the sole vote or should he swap out his allies and let Azah make the game-ending move against Kyland? Share what move you’d make if it were you in Xavier’s position.