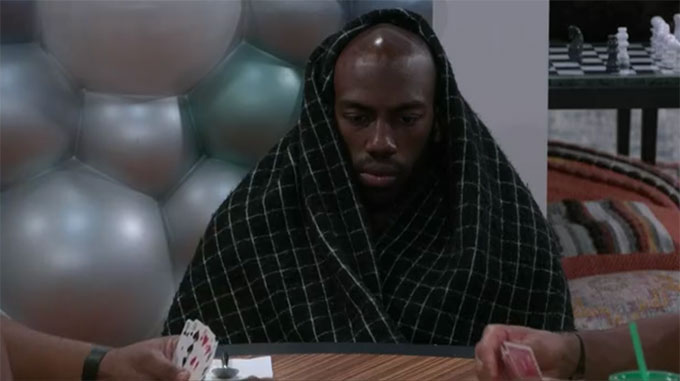 It was another quiet day in the Big Brother 23 house. We’ve come to expect this from the Final 4 each season, but this group is a particularly quiet one. Xavier and Azah did talk a bit about whether or not they can trust Derek to vote how they want this week, so there’s still a big chance Xavier will use the veto on Azah so she has the sole vote to evict Kyland.

11:10 AM BBT – Azah tells Xavier that Derek talked to her last night and Xavier reiterates that he will pull her down if he needs to. She adds that Derek made some ominous statements during their talk.

11:30 AM BBT – The guys are talking about dating and relationships. Derek is talking about how hard it is for him to find a guy and how he has never been asked out on a date.

12:30 PM BBT – Kyland and Azah are giving Derek advice on how to more open minded when it comes to finding dates.

1:45 PM BBT – Derek wonders if they will be getting videos from their friends and family this season. Xavier talks about how last season was the first season they did videos for jury members.

2:25 PM BBT – The houseguests are sitting in the kitchen playing cards. Not much going on.

3:00 PM BBT – The final four are all hanging out in the living room just general chit chat.

5:32 PM BBT – HGs keep getting called out for napping.

5:35 PM BBT – Kyland and Xavier are going over events and days and other things that might be a part of the final competitions.

5:40 PM BBT – BB calling out the napping now. It’s directed at Azah, who is the only one still sleeping.

6:03 PM BBT – Azah is out of bed and is talking about BB calling her out so long for sleeping.

7:00 PM BBT – Kyland and Derek are starting to prep food for Taco Tuesday.

10:20 PM BBT – Kyland is in the DR so the other HGs are gathered to discuss the situation. Xavier does not want to blindside Kyland, but doesn’t want to tell him just yet. X thinks Ky would fight until the last minute. He can’t decide when is the right time to tell him.

10:25 PM BBT – DF says he can’t believe he has to vote out Kyland because it will break his heart. Azah says she really wants to be the vote and she’ll happily do it. DR worries it will lose him Kyland’s Jury vote.

10:30 PM BBT – Azah points out to DF that each time he’s been on the Block it’s been a result of Kyland’s actions or influence.

11:40 PM BBT – DF laments his poor performances in comps and hopes still to find a comp he can win.

12:00 AM BBT – Azah and DF discuss evicted HGs. DF says Tiffany thought she could make F4 but then she crossed Kyland.

12:30 AM BBT – DF and Azah talking about the Jury house. He says he has to vote out Kyland or he’ll lose all the respect he’s earned so far.

1:00 AM BBT – DF compares his chances to Azah in F2. He tells her he couldn’t be her at the end because she hasn’t lied to anyone and has an HOH win. He says it’d be a tight vote between her and Xavier at F2.

1:05 AM BBT – Azah tells DF she would take him to F2 because it’d be good for her game, even though he declined a F2 offer she made him earlier in the season. She says she could see at F6 that neither Tiffany nor Kyland would take her to F2.

Another day of Kyland’s game running out. Just one vote and DF, despite his protests, is likely ready to cut Kyland. Or will he? Xavier seems ready to make the swap and let Azah do the vote but we’ll have to see if it comes to that.