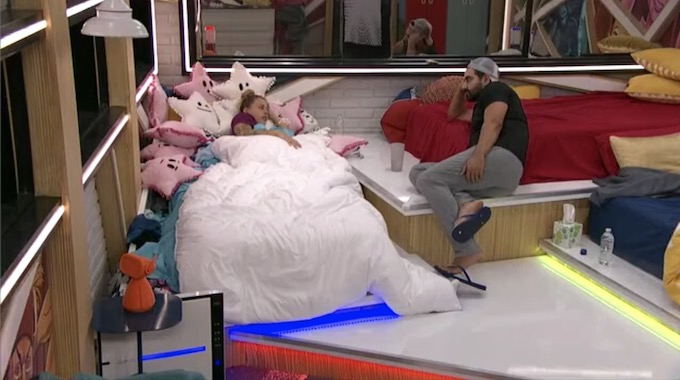 It is Power of Veto Ceremony day inside the Big Brother All-Stars house! Enzo nominated Kevin and Kaysar for eviction this week on Big Brother 22 with Kaysar being his primary target. However, there is a chance that Kaysar could stay in the Big Brother house depending on what happens during the POV Ceremony.

With Kevin winning this week’s Power of Veto competition, Enzo’s plan to have Kevin on the block next to Kaysar come Thursday is no longer an option. There have been talks about a lot of different options, but there’s only one route that Enzo plans to take. The safe one.

Enzo has talked a lot about backdooring Ian this week, but that was only an option if Kaysar won the POV and pulled himself off. Kaysar is still the primary target even though the noms are changing.

Last night, after the wall yeller, there were talks about how dangerous Dani is inside the house and how she is planting seeds with everyone. However, Enzo thinks that too crazy and it’s too soon in the game to rock that boat.

The final option is the safe option and likely the one that Enzo will actually execute. Christmas has volunteered to go on the block next to her new BB Bestie, Kaysar. She is confident that she will be safe and that Kaysar will be the one going home.

Although there has been a lot of talks between Dani and Nicole and Bay and Day about how dangerous Christmas is going to be as they get further into the game, I expect that they will stick to the plan of evicting Kaysar this week, but wouldn’t it be fun if they didn’t?

I expect that Enzo will stick to the plan of renominating Christmas in Kevin’s place unless something big happens between now and the POV Ceremony. Stay tuned for confirmation coming up later today!