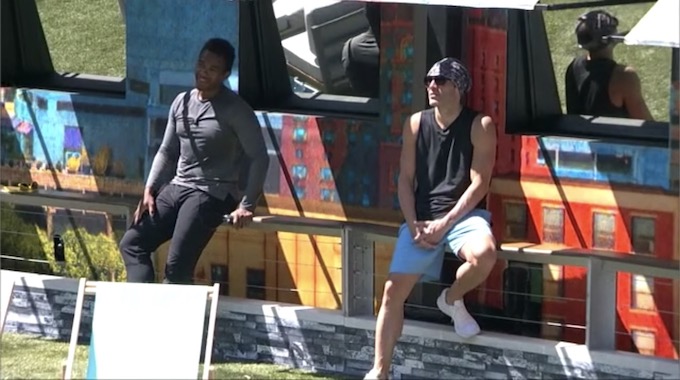 It was Power of Veto Ceremony day in the Big Brother house and we found out who will be on the block going into this week’s live vote and eviction show! While there was some hope for a shakeup in the Big Brother 22 house, Enzo went with the safe option. Read on to get the details.

9:37 AM BBT – Enzo tells Cody that he told Tyler that they play nice this week and then go after Dani next week. They talk about how Dani talked about the Slick Six in front of Nicole and now Tyler is upset that they didn’t tell him right away that Nicole knew.

9:43 AM BBT – Enzo tells Cody how Bay and Day told him that they can make a move on Dani this week and get her out. Enzo says that Tyler is down to get Dani out now too.

9:45 AM BBT – Enzo tells Cody that after he told Dani that Christmas was going up, she went downstairs and started talking to Christmas. Not even 10 minutes later, Christmas came up to the HOH room and told Enzo that she doesn’t think she should go up.

10:05 AM BBT – Enzo tells Cody that he has tons of people in the house ready to get rid of Dani, her days are numbered. Enzo is only worried that Dani will find out they are coming after her.

10:54 AM BBT – Enzo is telling Christmas that Kaysar is gone this week and then they have to win HOH next week. Christmas tells him that he is worried that Kaysar might blow up Christmas and Dani while Christmas is on the block.

11:03 AM BBT – Enzo and Christmas like that Kaysar is trying even though he knows that he is going home this week.

11:17 AM BBT – David tells Enzo that Kevin asked him before the POV if he could pick him and David told him that he could.

11:19 AM BBT – Enzo tells David he wants him to win HOH next week and go after people. He says that’s why he’s getting rid of Kaysar because he threw Tyler’s name out there.

11:25 AM BBT – Enzo tells David how there are a bunch of weak players in the house. Paranoid and weak because they know they can’t win.

11:55 AM BBT – Day tells Bay that she had a vivid dream of Dani going to one of the guys in the house, not Tyler, and told them that she needed Day out of the house.

12:03 PM BBT – Day asks Kevin if Enzo has told him who he is putting up. Kevin tells her no, but he did say that nothing is changing target wise (Kaysar is still going). He tells them that Enzo is getting annoyed with everyone trying to tell him what to do though so he’s hanging back.

1:27 PM BBT – Feeds returned. Kevin used the POV on himself and Enzo renom’d Christmas in his place.

1:30 PM BBT – Dani tells Cody and Nicole that there is a small lack of communication and it’s not good. Dani is clearly annoyed.

1:33 PM BBT – Bay asks Christmas if she knew that was going to happen and she said no. She says she understands though and pulled him aside and talked.

1:40 PM BBT – Christmas playing it up to Nicole saying that she is fine and she is going to do her campaigns. Christmas asks Nicole to keep her in the loop if someone mentions flipping the vote.

1:40 PM BBT – Day tells Tyler that she was hoping that being a HN with Dani would bring her closer together. Tyler then tells Day that Dani is the one going around telling Enzo that Bay and Day are too comfortable with Enzo being HOH. Day says “she’s next.”

1:42 PM BBT – Day says that they are going to have to try and get someone from the outside to take a shot at Dani. Tyler says that shouldn’t be hard to do.

1:50 PM BBT – Enzo says to Kaysar “you didn’t like that nom?” and Kaysar says no and asks him if he even considered it? He said he considered it but he has a good relationship with David.

2:00 PM BBT – Day is trying to clear the air with David. Day tells him that after he told her Kaysar had to do with everything came to light last week, she was going to leave it alone. Day then tells him that she went upstairs the next day to ask Tyler to use his shower and Tyler brought it up to her. She tells him that she then went to Cody, but she didn’t go to Tyler because he asked her not to.

2:07 PM BBT – Day asks David why he would go to Cody about her concern over the all-guys alliance. David tells her that he doesn’t remember saying that to him and he thinks that Janelle did that. David thinks that Cody said that to her to cause division.

2:15 PM BBT – Day tells him that if she wins HOH, she isn’t going to use him as a pawn and she hopes that he won’t do that to her too. They agree that people flip on pawns all the time.

2:21 PM BBT – Enzo tells Cody and Tyler that everyone in the house knows what Dani is doing.

2:23 PM BBT – Tyler tells them that they have a lot of ammo with Day because they haven’t told her that Dani told Nicole about their alliance. They are talking about who might target them and Cody mentions being worried about what David might do if he won HOH.

2:32 PM BBT – Cody says that he feels like Dani could win a comp if she needed to. Tyler says that’s why they have to get her before she gets them. Enzo adds that Dani knows too much about their game.

2:37 PM BBT – Cody says that all they have gotten for winning HOHs and keeping them off the block is paranoia and chaos. Cody talks about not being able to sleep and Tyler says that he tried for six hours to sleep but couldn’t find them. Cody tells Tyler that was his mistake, he really thought that they had talked about it.

2:49 PM BBT – Christmas and Ian are talking about Jury and how she would hope that everyone would vote based on gameplay, but there are emotional people in the house. Ian goes into how BB was based on Survivor and their slogan is to Outwit, Outplay, and Outlast. He breaks it down for her.

2:57 PM BBT – Dani tells Christmas that she has her vote and she doesn’t have to campaign to her. Christmas tells her that Cody was going to tell Kaysar straight up that he is voting to keep Christmas and Dani says she is going to do the same to avoid being cornered.

Enzo had some good choices that would have shaken up the house just a bit, but instead, he went with the option that keeps him safe in the long run. With Christmas being put on the block, it looks like Kaysar will be the one to leave on Thursday regardless of how much of a threat the other women in the house think Christmas is. We will see what happens over the next few days, but I don’t think anyone is looking to create waves this week.