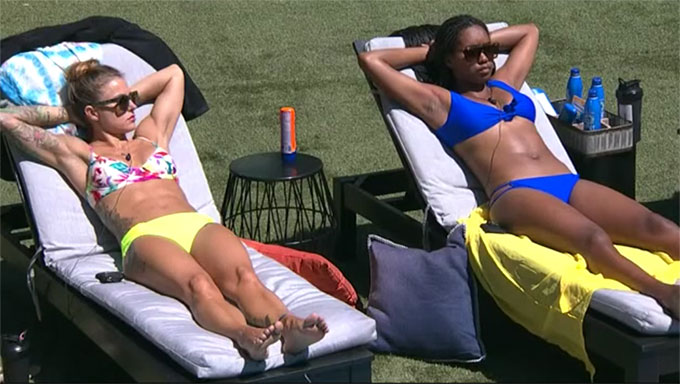 The Big Brother 22 houseguests have all but decided on who’s going home this week, so there wasn’t a lot of gameplay going on for a Monday night, but there is definitely some drama brewing within the major alliance in the house. Read on to find out who was the latest person to upset the alliance.

4:15 PM BBT – Tyler let Enzo know that he told Da’Vonne he and Cody know about Dani wanting someone to go after Da’Vonne.

4:18 PM BBT – Ian tells Kevin he thinks the next target will be David.

4:40 PM BBT – Da’Vonne goes to talk to Enzo. He tells her that it’s over, Kaysar is gone. Enzo said Kaysar tried to get David up, but he had no reason to put David up.

4:42 PM BBT – Enzo tells Da’Vonne it’s getting messy in there and no one has any respect and you don’t know who to trust. Da’Vonne says Enzo isn’t used to being backstabbed because The Brigade was loyal. He agrees. He says there’s no loyalty this season.

4:44 PM BBT – Da’Vonne tells Enzo she got word that Dani is coming after her. Enzo confirms. He says he could have gone after Dani this round but it was too early. He asks why they’re killing each other so early.

4:46 PM BBT – Da’Vonne asks Enzo how he found out Dani was coming after her. Enzo says Tyler told him (because earlier Tyler told him to say it). Da’Vonne doesn’t understand why Dani is coming for her.

4:56 PM BBT – Bayleigh tells Enzo and Da’Vonne that they’re all screwed now because Dani can expose their game. She said they should have gone with her pick for the alliance, Janelle, instead of Dani. She says Janelle would have stayed loyal. They all think Dani has been telling Kaysar their business.

5:16 PM BBT – Kaysar tells Da’Vonne he knows it’s likely he’s out this week, but he did what he came here to do and is content. He says they can’t just put him and Janelle in the house with no other pairs. He says what the hell did they think was going to happen.

5:20 PM BBT – Enzo tells Cody about Tyler letting him know he told Da’Vonne they know about Dani coming after her. Cody is pissed because that could mess them up if Dani hears about all of this. Cody says they’re all dragging them down now. Cody says Tyler never should’ve mentioned their names when he talked to Da’Vonne.

5:32 PM BBT – Kaysar tells Da’Vonne he’s almost certain the core four in the house are Cody, Tyler, Dani and Nicole. He says and they’re using Enzo to do some of their dirty work. He says he hopes someone does something about Cody and Tyler instead of just letting them get all the way to the end.

5:33 PM BBT – Cody tells Enzo they were in a good spot but now who knows. Enzo says Dani messed that up for them. Cody says it was Dani, Da’Vonne and Tyler who messed it up, not just Dani.

6:35 PM BBT – Memphis tells Dani it’s weird that Christmas is asking if she’s good and has his vote. Dani says she can’t just not campaign though because it will look weird.

7:36 PM BBT – Dani tells Tyler she thinks Da’Vonne is better now that Janelle is gone and if Bayleigh goes, Da’Vonne will only have them to fall back on.

7:44 PM BBT – Dani says that Ian is trying to play dumb but they all know he’s not dumb and says they aren’t newbies so you can’t really play that game this season. Tyler says that’s what he did in BB20 so when Ian does it he really picks up on it.

8:39 PM BBT – Ian tells Nicole the next round of the game is one of the most important. He says it’ll be the last eviction before jury. They agree it would suck to be the last one out before jury. Nicole thinks there will be a new twist next week.

8:42 PM BBT – Nicole asks Ian what he would do if he won HOH. He says he’d ask her because they should have the same targets. She asks if he’d backdoor someone. He says he hasn’t even though about that yet.

8:46 PM BBT – Nicole tells Dani that Christmas said Bayleigh told her she has information for her if Christmas wins HOH. Dani wonders who Bayleigh plans to throw under the bus. Nicole says she has a feeling it will be Dani and Cody Dani is confused why it would be her and Cody.

8:55 PM BBT – Nicole says they need Bayleigh to give that info to Christmas. Nicole thinks it’s about Cody and that’s all they’d need to get Cody to want Bayleigh out over Da’Vonne. Nicole tells Dani they can’t trust Tyler with this info because he’s too close to Bayleigh. Dani says they aren’t close but Nicole again says they are.

10:05 PM BBT – Ian tells Kevin they need to work together and won’t vote each other out. Ian says the Wall Yeller confirmed what he suspected, that Cody and Nicole are the core 2. Ian says the two of them could get to at least F4 or F5.

10:10 PM BBT – Ian starts running through all the possible permutations of the core+ alliances. He realizes Franzel has him convinced they’re a duo then she’s done the same with Dani.

10:20 PM BBT – Kevin and Ian agree they have to win and put up at least one of Cody/Franzel.

11:00 PM BBT – Kaysar tells Kevin his only chance was to be against David. Kevin agrees.

11:30 PM BBT – Bay talks to Cody about Tyler asking if Dani was trying to pit her against Cody and Tyler. Bay is worried there is a plan to nominate Bay and Day together.

11:40 PM BBT – Bay says Day is struggling with the Dani revelations because she (Day) thought she was good with Dani. She mentions talking with Enzo last night about BD’ing Dani.

11:50 PM BBT – Ian talks with Dani to get her take on the house right now. She thinks David would go after Memphis and claims she doesn’t talk game with Christmas. Dani expects they’ve got a DE coming up soon.

12:10 AM BBT – Day warns Kaysar that no one will vote Christmas out over him. She says if he’s got a move to make then he needs to do it. Kaysar says he doesn’t have anything to play.

12:15 AM BBT – Kaysar tells Day that Dani is the biggest threat in the game, not Cody and Tyler.

12:25 AM BBT – Kaysar wants to blow up Dani’s game and says he’ll reveal what he knows.

12:45 AM BBT – Day tells Bay the guys may see her as their Victoria. She’s insulted.

1:40 AM BBT – Kevin talks with Day and says he learned that Derrick (BB16) set up a pregame alliance between Cody and Nicole. Day wants to know who told him this (Ian) but he won’t tell her. She says she knows what happened with the Christmas renom but won’t share it until Kevin shares his Derrick info.

1:50 AM BBT – Day agrees she thought Franzel had a 3-person alliance with Cody and Tyler. Kevin says it’s those three at the core then everyone else is hanging off it and feeling safe.

2:00 AM BBT – Day says it’s Nicole and Cody at the center with Ian hanging off Nicole and Tyler hanging off Cody. Then the rest are in the outer ring. Kevin thinks Cody is setting up Dani to get her out and weaken Franzel.

2:05 AM BBT – Kevin says if they don’t get an HOH win here then it’ll be Day, Bay, Kevin, or David up on the Block next round. He warns Da’Vonne that she’s been mentioned as a possible target.

2:20 AM BBT – Day promises Kevin she won’t throw the HOH comp. She expects Kevin and David will go up together.

2:25 AM BBT – Kevin suggests they need to strike the center, not the allies hanging off. He wonders if they could use Memphis then nom Cody and renom Tyler if needed, but realizes Memphis would go in that case.

2:35 AM BBT – Day regrets letting Janelle go and knows she’d be there turning the game upside down now instead. Day says they need to go after Dani and not bother with targeting Ian.

3:10 AM BBT – Kevin is frustrated that Derrick is playing the game from home by setting up those preseason alliances.

3:35 AM BBT – Day mentions that Dani was pushing her to name David for HN next. Day realizes Dani was trying to pit them against each other.

3:50 AM BBT – Kevin says he has a deal with Cody that Cody won’t put him on the Block. Day points out that Cody would just have Tyler do it for him.

More revelations overnight for the state of the game as Ian, Kevin, and Day seem to be putting the pieces together but is it too little too late now? Kevin and Day are right that if one of their small group doesn’t get power soon, like immediately soon, then this landslide will continue and take them out in the process.