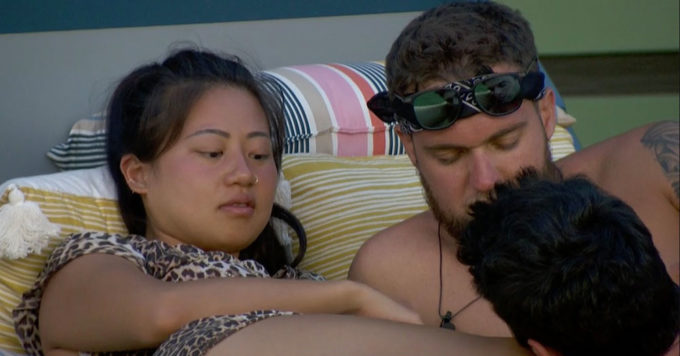 The Big Brother 21 houseguests are always changing their relationships and deals, it seems. I don’t recall ever needing as many updates as we do this season. But here we are once again, with a breakdown of who is working together and who is not. And as always, thanks goes out to @89razorskate20 on Twitter for helping us all keep track (check out the chart from them below).

At the top of the heap is still Gr8ful. Of course once too many people kept saying “the eight” in front of Sam (and not to mention Bella blabbing everything), Sam was pulled into the eight officially, making them the nine, or “Und9able.” So that’s basically a sham group at this point as Bella and Nick are on the outs of the group and would be totally out by now had Nick not won HOH this week. So along with them will go Sam. Christie has even stated the next three targets need to be Bella, Nick and Sam (in that order).

And within those nine are the more tightly knit “Six Shooters” consisting of Jack, Jackson, Holly, Christie, Anaylse and Tommy. The latter four have an agreement that they’ll go after Jack and Jackson first, giving them a final four deal. And of course Tommy/Christie and Jack/Jackson each have their final 2 deals.  Jack also seems pretty set on being at the end with Christie, too, though, so that’s going to get messy eventually. Tommy would round out a final three with Christie and Jack, meaning Jackson might not be in Jack’s endgame plan.

Holly and Jackson have a thing going on, but Holly promises the girls she’ll cut Jackson if she ever needs to. And then Holly and Kat have a pretty silent deal (one that we still think might have been made before the game even began). Kat/Jess and Holly/Analyse are also pairings. There are so  many people with so many deals, I really have no idea who it will all play out.

On the outside of everything are Nicole and Cliff. And they were working together with Ovi (despite his Camp Comeback status) but that was outed when Christie overheard Cliff’s morning talk. And since either Cliff or Nicole will be evicted this week, that leaves Nicole and Cliff off on their own.

Speaking of Camp Comeback, Ovi, David and Kemi are just hanging out until the competition to return this week. David has been working pretty hard to develop relationships with the house since he didn’t get to do that the first week. He seems to be pretty close to Kat at the moment, but many of the HGs have said they’d prefer David to return to the game than the other Camp Comeback folks.

So things are pretty messy in the BB21 house right now. It looks like after this week Bella and Nick might be kicked out of the big alliance, so that will leave them with Sam. And if Nicole survives, Christie and some of the others want to pull her in to help them go after Bella and Nick.

What do you think will happen after this week on Big Brother 21?